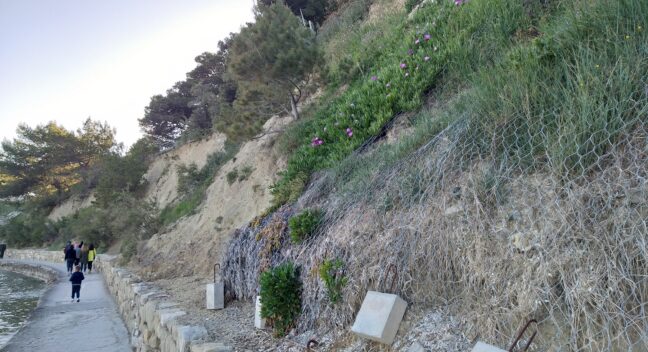 Coastal cliff stabilisation techniques are ‘green’ measures to reduce cliff erosion and its consequences – landslide, collapse, falling of rocks – compared to cliff strengthening techniques that are ‘grey’ measures. Decisions on which methods to apply are based on the natural characteristics of the cliff (nature of the cliff, cliff geometry, hydraulic behaviour and mechanical forces), the type of instability, socio-economic stakes, landscape value and access conditions. In practice, the two approaches are often combined

Coastal cliffs, according to their morphology and structure, can be loose (sand, silt, clay, marl and chalk) or hard (limestone, sandstone, granite or other rocks). Loose cliffs are more prone to erosion and landslide than rocky cliffs, which are more characterised by rockslides or block fall. Cliff erosion in coastal areas is usually erosion of the foot of the cliff, caused by wave action and storm surges.

Cliff stabilisation techniques increase the stability of the slope and reduce sea-caused erosion at the foot of the cliffs. These are:

These two techniques are usually combined, as re-vegetation alone is a short-term solution which does not stop the coastline erosion.

A famous example of protection from rockfalls from rocky cliffs is in the coastal city of Omiš (Croatia) where 25 micro-locations around the city (approx. 2.5 km of length) were protected (2016-2018) using the combination of techniques:  rock fixing with geotechnical anchors; using steel clamps to stabilize the unstable rock parts; steel nets for protection; mechanical “tentacles” for the movable parts of the crushed rock; anti-rockdslide barriers, etc.

Cliffs are among the most attractive parts of the coastal environment and support the tourist offer, both as viewpoints at the top and bathing areas below. Casualties can occur with people falling from the top, slipping along the paths or being hit by falling stones while sunbathing on the underlying beaches. Any cliff stabilization work must be accompanied by warning signs and safety measures, closing the access to dangerous paths, limiting the closeness to the cliff base.

The benefits of cliff stabilisation must be balanced with the costs of the measures. Letting the cliff erode has been considered in some areas as more cost-efficient than stabilisation or reshaping measures.

Littoral strip reloading has similar shortcomings as beach nourishment: reload material should match the characteristics of the native one, the source area must be close enough, repeated reloading is usually required, etc. This technique can be beneficial for recreational purposes.

Re-vegetation has little impact on landscapes and is usually supported by littoral users. However, it can only be applied to small areas, and in most cases it is only a short-term solution. The type of vegetation planted has to be chosen carefully according to the nature of the soil or the rock surface. Local species should be preferred. If not well managed, the growth of the roots can even have adverse effects: instability by causing rock fracturing.

Some of the cliff-strengthening techniques have high start-up costs as they require preliminary studies and specialised private contractors to be hired. Rock bolting can be complicated to implement and therefore costly. On the contrary, rip-rap strips are a rather low-cost method. The installation of a geogrid can also limit the costs as it can avoid resorting to more costly solutions. In nearly all cases, however, specialised civil engineering contractors must be hired.

Regular maintenance costs will be needed for cliff reshaping, concrete buttress and rock bolting, but also for geogrid and pinned nets, since these need regular inspections and surveillance for safety reasons.

Cliff reshaping can disturb biodiversity by destroying habitats, although in some cases combination with re-vegetation can even improve local habitats. Some techniques (concrete buttress and rip-raps; pinned nets) can have a strong impact on landscape. Reshaping work can have a strong visual impact (depending on the scale of the works) and can negatively influence tourism.

We kindly thank Prof. Enzo Pranzini from University of Florence, for all the help and support in preparation of this text.