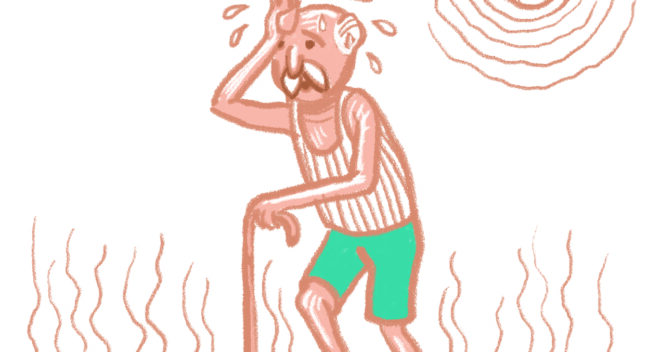 Evidence that climate change and especially extreme weather events cause impacts on human health is well documented. High temperature can lead to increased mortality and morbidity, with heat waves being a major concern in Europe, especially in southern and Mediterranean countries. In addition, mortality related to flooding is expected to increase, and change in the distribution of vector-borne diseases is expected to occur. Urban areas with great concentration of people and infrastructure are especially vulnerable to the health effects of climate change. Vulnerability in cities largely depends on urban design (e.g. impermeable/permeable surface, presence/absence of vegetation and shaded areas, occurrence of water elements, etc.) and on the availability of adapted health services.

Integration of health in climate change adaptation and mitigation policies of other sectors and integration of climate change into public health policies and actions were identified by WHO Europe as key policies to promote action in the EU Member States aimed at protection of the population health.

The most frequently considered direct health impact in climate health plans (also called heat-health action plans) is that of rising temperature, particularly regarding heat waves and heat island effect in cities. In order to improve the public health response to extreme temperatures and heat waves, the EuroHEAT project quantified the health effects of heat in cities in the WHO European Region, and identified options for improving the preparedness of health systems and their responses to protect health. The key message of the project is that climate change is increasing heat waves occurrence and that heat threatens health. EuroHEAT recommends the development and implementation of heat health action plans at national and sub-national levels to prevent, react to and contain heat related risks to health.

Heat health action plans have been prepared by several European countries, including Italy and Croatia. The Italian Operational Plan for the prevention of heat effects includes the establishment of Health Watch Warning Systems for an accurate forecasting of heat waves, surveillance systems to monitor daily mortality, local prevention plans and emergency plans at municipality level, periodically updated guidelines for heat prevention, and identification of main groups of population at risk. Although Croatia does not yet have an Action Plan specifically aimed at protection from heat, there is a “Protocol for action and recommendations for protection against heat”, developed by the Ministry of Health. The system based on this Protocol is well developed: it details all the necessary procedures and Croatian regional Institutes of Public Health regularly warn of incoming heat waves and send notifications to all health care institutions, schools, retirement homes, and through the media directly address citizens with recommendations on how to act.

Emergency procedures, medical services and early warning systems are found to be among the main strategies to cope with heat and climate related stressors. Modification in urban design (increasing green areas, establishment of green standards for new development projects, improvement in housing) is also considered in climate plans adopted at urban level to protect people health and well-being (e.g. Barcelona Climate Plan). Information platforms such as the Meteoalarm initiative can work as relevant tools for all European countries, providing relevant information needed to prepare for extreme weather expected to occur all across Europe.

When developing new or improving existing plans on climate related health plans, emphasis should be on developing strong collaboration among bodies and institutions, both horizontally and vertically, involving environmental agencies, meteorological services, social and health services, and the civil protection. Communication of risks posed by heat or other climate drivers and communication of measures undertaken in action plans are essential to ensure effectiveness of the plans.

Most existing climate health plans are led and/or funded by related sectoral Ministries; in some cases, research projects were the starting point for the plan elaboration and (pilot) implementation. The full implementation of a health action plan requires staff work in various areas related to the prevention of health risks. Thus the estimation of costs and resources associated with the plans is rather difficult and context-specific.

The main benefits are the prevention of and early reaction to adverse health effects, especially on most vulnerable target groups. Possible modification in urban design, offering green or shaded spaces, or improvements in housing conditions have larger and longer-lasting effects, not only on health but also on other sectors (see for example other adaptation options as green roofs, green space and corridors, integrated land-use planning). Modifications in urban design to improve well-being also lead to important mitigation benefits, for example providing more vegetated areas for CO2 sequestration. Other mitigation benefits could derive from measures addressed to reduce air pollution (including GHGs) undertaken to lessen the increased impacts from pollution under heat conditions.

Climate action plans, if properly communicated to people, can provide better understanding of risks and effects of climate change on health, motivating and facilitating both behavioural impact and societal support for actions.

The elaboration of a heat health action plan is a relatively quick process, which can require a few years, but it strongly depends on the level of needed collaboration among actors in the field of health and early warning. Implementation as well as its monitoring is a continuous effort, also depending on the availability of medical and social services that are very context-specific.

To be effective, prevention measures must be prepared in times of non-emergency and implemented promptly upon the arrival of the first heat waves, which are the most harmful to health especially because the population has not yet activated the natural adaptation mechanisms.

Actions foreseen by health plans are normally assumed to continue for a long-term. Monitoring, evaluation and reviewing are essential components of any plan, to adapt it to evolving conditions.

WHO, Regional Office for Europe (2017). Protecting health in Europe from climate change: 2017 update