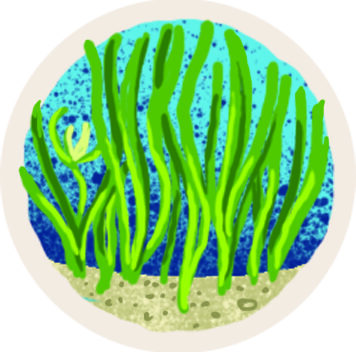 In the case of beach/coastal erosion, an important „defence role“ is played by seagrasses. Seagrasses entrap the sediment, stabilize the seafloor and thus, prevent erosion of the coasts. When seagrasses trap the sediment, the bottom gets shallower, and the waves break further away from the shoreline, resulting in less coastal erosion during storms. Seagrasses also slow down the movement of ocean currents between the seabed and the tips of their leaves. Some recent studies have indicated that wave heights were 10-20 % lower in dense seagrass meadows, compared to a bare seafloor (phys.org).

Seagrasses also play an important role in climate change mitigation. They have significant potential for sequestering carbon through their biomass and by filtering out fine organic material from the surrounding water. Globally, seagrass meadows are responsible for more than 10 % of carbon buried in the ocean, even though they occupy just 0.2 % of the world’s seafloor (Fourqurean et al., 2012). According to some estimations, seagrasses capture carbon up to 35 times faster than tropical rainforests (www.wwf.org.uk).

In the Adriatic Sea, there are four species of seagrass, of which the most widespread is the Posidonia oceanica. Posidonia meadows are an extremely valuable habitat for the Adriatic, and therefore, their protection is essential. Apart from mentioned role in climate change adaptation and mitigation, Posidonia oceanica is an indicator of seawater quality, since it is very sensitive to pollution and can only grow in clean, unpolluted waters. Posidonia has been called “the lungs of the Mediterranean” because it is one of the most important sources of oxygen provided to coastal waters. Posidonia population produces 14 to 20 litres of oxygen per square metre every day in the Mediterranean (medwet.org). Its meadows support a wide variety of animal species with food, shelter and as a breeding area, supporting fisheries and livelihoods.

At the same time Posidonia meadows are endangered in areas directly subjected to human activities such as anchoring; smothering and increased turbidity by material from coastal construction; eutrophication and other types of contamination; improper fishing with seiners, trawlers and bottom-dragging tools; and the spread of invasive species.

Importance of protecting Posidonia is widely recognized on several levels: Posidonia is included in Habitats Directive and Natura 2000 network of nature protection areas as a priority habitat. In Croatia, the Areas of Special Conservation Interest (ASCI) are established (based on Bern convention) for all seagrass species, as part of the “Emerald Network”. In addition, all seagrass species are protected on a national level in Croatia as strictly protected native taxa by the Nature Conservation Act. Italy also ratified a number of international legislation (such as Bern Convention, Habitats Directive, Water Framework Directive, Marine Strategy Framework Directive) in order to protect Posidonia meadows and other seagrass species.

Despite all these protection initiatives, a recent analysis of area coverage indicates a 34% decline in distribution area or degradation in the past 50 years in the Mediterranean Sea (Telesca et al. 2015).

Conservation of seagrass meadows offers many benefits such as the provision of marine species with food, shelter and an area for breeding; carbon sequestration; oxygen production; and coastal protection via entrapment of sediment. It is assumed that one hectare of seagrass is estimated to be worth over $19,000 per year (ocean.si.edu).

Up to recently, seagrass protection has not been motivated by their role in shoreline protection, but mainly by their importance for marine biodiversity. Increasing knowledge on their role in coastal protection represents a new challenge for the local and regional administrations responsible for the coast.

Several projects of Posidonia planting have been carried out in the Mediterranean with different success. Replanting can have considerable expenditure and be labour-intensive; therefore, seagrass protection is by far a more cost-effective measure.

Implementation of Posidonia replanting can be a relatively fast process, but since Posidonia grows quite slowly (only 1cm per year in height), a relatively long period of time will be needed for observing the results, i.e. the level of success of such activities.