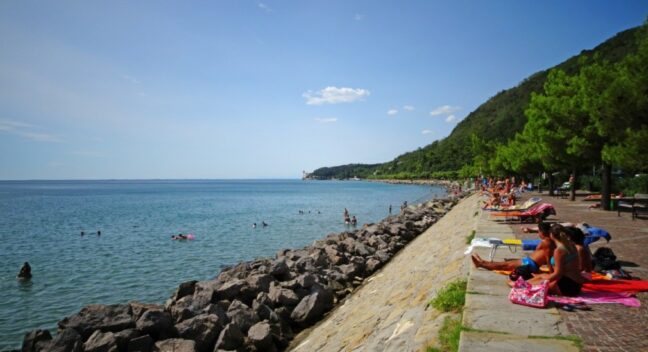 Seawalls are structures made of hard material (e.g. stones, concrete, masonry or sheet piles), built to protect the inland area against wave action and to prevent coastal erosion. Seawalls also serve to stabilize eroding cliffs and to protect coastal roads and settlements. They are built parallel to the shore at the transition between the beach and the mainland or dunes. Seawalls are often found in the case of narrow or steep beaches, where typical breakwaters are either too large or not economical.

Over time, their constructing material changed: while most of the time stone structures were used, today more and more concrete structures and materials are reinforced with synthetic materials.

Seawalls are usually massive structures, often concave and high enough to protect the land against wave overtopping, with a “thorny” surface to reduce the backwash velocity. Stair-case profile is also sometimes used to reduce the back-wash velocity, but also to accommodate sun bathers, coastal paths, or bike routes. In one such example, a bike route was built on a revetment protecting the railway at Pedaso (Marche).

With climate change and increased vulnerability to waves and stormy seas, many current seawalls can be seen as rather outdated and low in today’s standards.  However, when considering adaptation to climate change, another advantage of seawalls is that it is possible to progressively upgrade these structures by increasing the structure height in response to sea level rise. It is important, however, that seawall upgrade does not compromise the integrity of the structure.Along the Adriatic coast these structures can be found in almost any country, but their height and extension is generally limited due to the low wave energy of the Adriatic Sea. The Venetian Murazzi, now converted in more complex structures with a beach in front, were a masterpiece of the ancient coastal engineering knowledge. Structures attached to the coast are present e.g. at Bari (Puglia), Novigrad, Rovinj and Pula (Croatia), Neum (Bosnia and Herzegovina), Vlorë (Albania). In most of the cases, they are small revetments built to protect roads or houses close to the sea. In coastal villages and towns inside bays, quays are built, mostly on Croatian side of the Adriatic. These structures have a function of protection from wave-action, and are to certain extent lower in height than “usual” seawalls. They are built to serve as protection of houses, promenades and roads; and in some cases as docks for mooring small boats.  Such constructions, however, can induce beach erosion through reflection of waves (if there are beaches present in front of these structures) and many beaches have disappeared after construction of quays.

Construction costs are high but these structures usually require low maintenance. Construction costs vary according to the shape of seawall structures: the volume of the seawall depends on the required crest level, the foundation level, the wave loading, and acceptable overtopping rates. The costs also vary according to the type of construction, dimensions, availability and proximity of construction materials, anticipated rates of future erosion and wave loadings, facilities such as walkways and steps or slipways. In the Netherlands, it has been estimated that a seawall would cost 300-500€ per m3 of concrete (Deltares, 2014).

Some limitations need to be taken into account. Seawalls and quays often interfere with natural processes such as migration of inter-tidal organisms, causing the reduction of intertidal habitats. Although they prevent erosion of the dunes and hinterland behind them, vertical seawalls often reflect wave energy instead of dissipating it, which makes the shoreline in front of the seawall  subject to erosion.. Many seawalls have therefore been more recently conceived to integrate slopes. When seawalls are regularly overtopped (in major storms) the water can remove soil or sand behind the wall and weaken it.  This water saturates the soil and increases pressures from the landward side, which can cause structural collapse. Also, continued erosion can undermine the foot of the structure and threatened its stability. Finally, seawalls can reduce the attractiveness of the landscape, although, on the other hand, they can create recreational space (see Description).

Seawalls and quays have many major benefits. They have a lower space requirement than other coastal defences such as dikes. They are adaptable. i.e. they can be heightened to face sea level rise, which requires simultaneously a widening of the foundation. The high level of security provided by a seawall/quay can favour the development of the hinterland. The crest of the seawall often extends into a stone covered part providing other functions, e.g. road, promenade or parking places.

As for the abovementioned impact on intertidal habitats, prefabricated blocks with rough surfaces and holes have been produced recently, to favour the attachment of marine plants and animals.

Depending on the complexity of the structure 5 to 20m per day can be built during construction phase. Preparation before construction might double the implementation time. The seawalls have a typically a lifetime of 30-50 years before a major repair.