HomeCase StudiesSocietal optionsCoastal protection and managed retreat of the coastal road between Sète and Marseillan, France 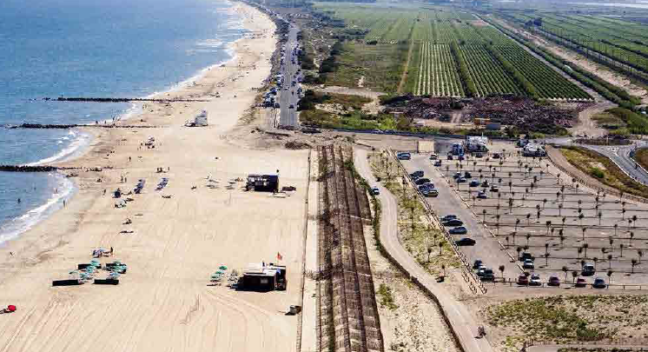 Keywords
beach nourishment, coastal protection, dune restoration, Managed retreat, road protection
Climate impacts
Flooding, Sea level rise, Storms
Sectors
Coastal management, Disaster Risk Reduction, Sectors specific, Transport
Implementation time
Feasibility studies on the managed retreat of the coastal road and connected interventions of beach and dune restoration started in 2003 and were completed in 2005, including stakeholder consultations. The design of the interventions was finalized shortly after and works started in 2007. Works were implemented in three successive phases: (i) the first (2007-2008) consisted in the construction of the new road; (ii) the second (2008-2009) focused on the restoration of the sand dunes, the construction of the cycling track and the dismantling of the old littoral route; the third phase (2009-2010) enabled to finalize the works on the new street. Beach nourishment and works to place the geotube off the shore were carried out from 2013 to 2019. Implemented measures are meant to last for over 30 years.

The littoral between Sète and Marseillan in the Occitanie region of South France is a sand strip that separates the Thau lagoon from the Mediterranean Sea. The strip is 12 km long and 2 km wide and the littoral hosts different human activities, including a bottle-filling firm, a camping, a railroad, a road, vineyards, fishing farms (mainly producing oysters and mussels). Moreover, it is a well-known touristic area with summer seasonal restaurants and bars along the beach that generate profitable business for the region. The sand strip has also an important environmental value, hosting dune ecosystems rich in biodiversity that, however, have been damaged over the decades. Also, the Thau lagoon is a site of high ecological value, in particular for birdlife.

The littoral is a fragile system and is threatened by climate related hazards, mainly coastal erosion, storm and storm surge, that have determined a loss of sediments and a constant decrease of the beach width. The coastal erosive dynamic is aggravated by the human presence and in particular by the road that once broke off the natural length of the fore-dunes, inhibiting their natural adaptability and mobility. Over the years, extreme weather events regularly destroyed sections of the road and significant portions of the beach.Between January 1997 and December 2014, 13 devastating events were registered. The frequency and the intensity of extreme storm events are expected to increase because of climate change in combination with the projected rise of the sea level. According to the EEA, between 1993 and 2019 the sea level in South France has increased by 2-3 mm/year. By 2081-2100 sea level is expected to increase by 0.2-0.4 meters for the RCP2.6 scenario and for more than 0.6 meters for the RCP8.5 one.

To face the problems of current and future coastal erosion, shoreline retreat and damages to coastal infrastructures, an important project of managed retreat of the coastal road and of beach and dune restoration was implemented along the Sète-Marseillan littoral. Specific objectives of the project are:

In the ‘90s of the last century the first measures to face coastal erosion and storms aimed at protecting the coastal road were implemented. They consisted in a line of rip-rap and groynes for four kilometres on the South-East side and breakwaters at Sète, where the road was closer to the sea. These measures did not solve the problem. On the contrary, the line of rip-rap accelerated the recession of the beach, while the groynes and the breakwaters moved and aggravated the erosion of the downdrift sectors.

Since the use of hard protections turned out to be a failure, the Interministerial Coastal Development Mission and the Coastal and Navigation Service developed a project aiming to move the coastal road backward. The old road was removed and replaced by an equivalent one built 100 m back, close to the railway track. Nonetheless, the additional backward shifting of the road was limited by the presence of the railroad. The project also included the reorganization of the parking system and the construction of a cycling track.The road realignment allowed gaining space for the beach and for coastal dune protection and restoration. In particular the beach and the dunes were nourished with 600,000 m3 of sand, mainly taken from the underwater Espiguette sandbank placed in Le Grau du Roi – Port Camargue, 40 km eastward from Sète. Wood fences were installed and dunes were revegetated to reduce the erosive action of the wind and consolidate the dunes. Dune restoration contributed to reduce the beach erosion as well as to protect some coastal infrastructures. To further limit coastal erosion and reduce the impact of storm surges on a portion of the coast where the withdrawal from the road did not allow sufficient retreat, 2.4 km of geotextile filled with sand were placed 350 m off the shore at a depth of 4.5 m. The geotube breaks the waves and helps to retain sand, therefore limiting the erosion of the beach. It has been shown that the system has made it possible to save 12 m of beach in 3 years.

The managed retreat of the road was designed by the Interministerial Coastal Development Mission and the Coastal and Navigation Service and supported by the Community of Communes. Sète agglopôle méditerranée designed and implemented the interventions aiming to restore the beach and the dunes. Sète agglopôle méditerranée gathers 14 municipalities surrounding the Thau lagoon and has been established for the purpose of providing common public services to citizens, realizing common development projects and for the common management of the lagoon.

Protection of the littoral from erosion was promoted within the frame of the BEACHMED and Messina projects. The two projects respectively aimed at promoting the use of new technologies for coastal management and sharing knowledge and information with the local community on coastal erosion and its threats.

Focus groups were organized to understand stakeholders’ perception of the climate related risks in the area, acquire their knowledge about the problems affecting the littoral and know more about their interests. The consulted stakeholders resulted in being highly conscious of the risks affecting the area and of the urgency of acting to improve coastal protection.

The implementation of the interventions on the littoral pursued multiple-objectives, which represents one of the success factors of the overall project. Infrastructures and people security were strengthened through the road relocation, improved beach protection and restoration of dunes. These interventions enabled to maintain the core economic activities of the littoral and at the same time to improve its landscape and natural habitats, with positive effects on tourism and recreational activities.

The implemented measures have produced both environmental and economic benefits. Protection of the beach, coastal infrastructures and economic assets have been improved. This, together with dune restoration and the construction of a cycling track along the littoral, have improved the touristic value of the area. Interventions on the dunes have also had positive effects on local flora and fauna biodiversity.

Title: Implemented interventions
Description: The photo shows the widening of the beach and the dune restoration (including wood fences) in place of the old road.
Source: Sète agglopôle méditerranée, Archipel de Thau