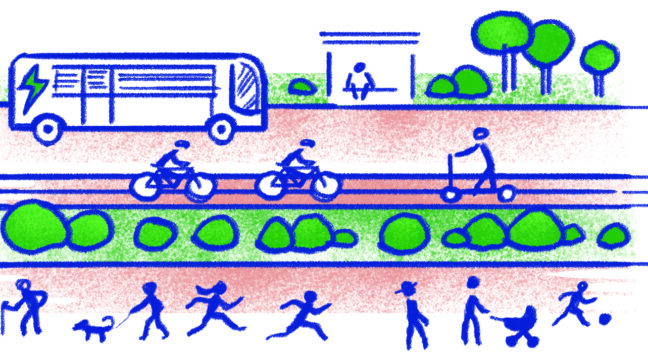 The transport sector is challenged by a number of climate change impacts, including temperature change, increasing extreme weather events and sea-level rise. Rising temperatures and extended heat-wave periods can increase rail buckling, pavement deterioration and thermal discomfort for passengers in vehicles. Weather extremes generating floods or landslides can lead to both short-term and long-term service interruptions. In coastal areas, sea-level rise and associated storm surges can threaten harbours and other transport infrastructures and services located in flood prone areas. On the other hand, transport is one of the main causes of greenhouse gases emission, largely contributing to the climate change. In order to achieve the EU’s goal of climate neutrality by 2050, transport emissions will have to be drastically reduced, by 90% compared to the 1990 levels. Synergies between adaptation and mitigation actions are hence to be encouraged for this sector.

Measures can be performed at different spatial scales. At urban level, adaptation can be mainstreamed in local mobility and traffic planning. Opportunities for adaptation can be found in the Sustainable Urban Mobility Plans (SUMP) introduced by the EC as long-term vision tools, designed to satisfy the mobility needs of people and businesses in cities for a better quality of life. SUMPs have been adopted by several Croatian and Italian (Osservatorio PUMS) cities introducing measures to increase sustainable mobility that can contribute to relieve pressure from the transport sector and reduce its vulnerability. However, in June 2020 the EU published a thematic study which showed that progress towards sustainable urban mobility was not satisfying. The study proposes several measures, one of which is the existence of SUMP as a prerequisite for applying for EU financing.

Analysis of future climate variability and risks can also be integrated in Environmental Impact Studies and Strategic Environmental Assessments of specific projects and plans dealing with transport to avoid the construction of roads, railways and other infrastructures in areas vulnerable to climate change related risks (such as floods, storm surges and sea-level rise in particular).

Adaptation refers to both transport infrastructure (roads and railways tracks) and operation and services (routing, contingency plans, real time information systems, etc.). As for the infrastructure, adaptation includes actions aimed at maintaining, managing, strengthening and protecting it from damages caused by the climate. This includes revision and improvement of long-established practices, but also new practices and technological innovation (for example new materials resistant to extreme temperature and climate proofing of underground tunnels exposed to flooding). Relocation of infrastructures should also be considered, especially when the infrastructure exceeds its lifetime or when it can be severely damaged. Green measures are other examples of complementary measures that can have a role in reducing vulnerability of transport infrastructures to the climate change, as in the case of maintenance or restoration of natural floodplains (Rehabilitation and restoration of rivers) allowing controlled river flooding or consolidation of hill slopes next to the roads and railways through tree planting and maintenance.

Besides infrastructures, adaptation shall also refer to service and operation, especially for urban public transport and railway: real-time traffic information systems, early warning systems and journey planners are tools that help preparedness of the transport sector to extreme weather events. Redundancies of transport routes and transport multi-modality support the efficacy of these measures. Actions aimed at reducing demand for new transport infrastructure, and hence its vulnerability, should also be considered as complementary adaptation actions. These include changing travel routes, changing travel habits, adoption of car sharing initiatives, enhancement of pedestrian and cycling routes with shaded areas and connection to green areas. According to the National Adaptation Strategy of Italy, the effects of the climate change on the transport sector are not fully mapped or assessed. The strategy also recognises that better knowledge is needed about climate-proof infrastructures. The suggested actions include the integration of climate change issues into the current urban planning tools. Local examples of adaptation of transport infrastructures are included in the Ancona Adaptation Plan (Italy), developed within the ACT Life Project. Moreover, Italy and Croatia are cooperating in “upgrading sustainable energy communities in mayor adapt initiative by planning climate change adaptation strategies” (Life Sec Adapt). Impacts on infrastructure and economy, including possible inaccessibility or disruption of transport network, are among the main climate change impacts for the Marche and Istria regions involved in the Life Sec Adapt project.

Costs are variable and depend on the specific adaptation actions which are designed and implemented. The highest costs refer to complex interventions of renovation of old infrastructures or their relocation in safer areas. Adaptation of operation and services may require lower costs, including simpler measures such as real-time information systems or urban re-organisation of routes.

Benefits include the overall reduction of vulnerability of transport systems, reducing malfunctions, inefficiencies and interruptions of services also in the cases of extreme climate events. Greater benefits are delivered when transportation plans consider both adaptation to and mitigation of the climate change with actions aimed at increasing the resilience of transport infrastructures and services in initiatives of shifting towards low carbon economy. Structural long-term changes in the organisation of transport and mobility (e.g. changing transport behaviour and transport demand) can work in this direction. The identification of adaptation actions with co-benefits in term of mitigation can compensate costs and favour investments.

The typical time needed for the implementation of measures in transport infrastructure is several years (approximately 2-5 years). Such a long time can act as a hindrance, together with economic costs, for this kind of interventions. The lifetime of any infrastructure is several decades, depending on the level of maintenance and operating conditions (e.g. traffic load, natural conditions, etc.). For example, the life expectancy of waterfronts in harbours is at about 50 years. It means that the height of the waterfront must be planned for at least the climate conditions and sea level projected for the year 2070.

Implementation of operational measures, however, is faster and can react promptly to the disturbance caused by extreme events. The provision of early warning systems and information systems is continuous requiring, however, constant maintenance and upgrading.

EEA, (2014). Adaptation of transport to climate change in Europe. Challenges and options across transport modes and stakeholders.