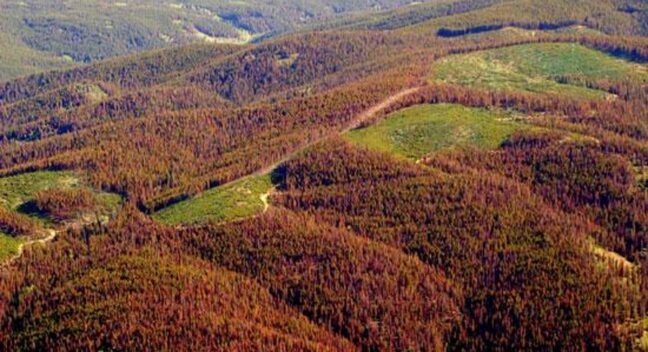 Mass tree mortality caused by a sudden increase in pest population can have extremely detrimental effects on forest ecosystems, which is reflected in biodiversity loss, lost carbon sinks and severe disturbances in ecosystem functioning. Climate and environmental changes can cause the spreading of harmful insects into new areas and change their seasonal phenology, resulting in faster development and increased food consumption, which in turn has direct negative impacts on the health of forest ecosystems. In the new Strategy on Adaptation to Climate Change, unprecedented bark beetle outbreaks are cited as negative effects of climate change (EC 2021). A sharp increase in the Mediterranean bark beetle population size (Orthotomicus erosus) in Croatia and the enormous damage it brings (Pernek et al. 2019) is a recent example of chaining the adverse factors associated with climate change. In such conditions, the biology and population of pests change in an unprecedented way, and their spread threatens the forest ecosystem. Also, a new complex disease associated with climate change has recently been recorded on holm oak (Quercus ilex), referring to the invasion of the oak splendour beetle (Agrilus sp.), which is thought to be associated with bacteria. The disease spreads territorially, threatening the indigenous holm oak forests. The negative impacts of environmental and climate change on forests also reflect changes in tree physiology, which exhaust their defences.

Given that the aforementioned phenomena are new and unexplored, the lack of information and knowledge poses a serious problem, which is why the reaction is slow and the intervention is delayed. The negative impact on Mediterranean forests will likely come much sooner, given the increasing temperature and the frequency and intensity of drought and longer growing seasons (IPPC, 2014). Even a slight increase in temperature can stimulate changes in the rate of insect development, the number of generations, population density, size, genetic constitution, extent and mode of utilization of the host plant, and longitudinal and latitudinal distribution (Lieutier and Paine, 2016). A completely different group of pests is composed of invasive species (Jactel et al., 2020), which are not necessarily related to climate change, but also have the potential to cause major damage to forests and should be taken into account throughout the monitoring process. They are mainly under the supervision of the National Plant Protection Organizations (NPPOs). Nonetheless, some weak spots have already been identified.

Early pest detection is therefore crucial to suppress or mitigate adverse effects after their gradient outbreak. Even if there is a pest monitoring system in forests at the state level (monitoring), it has not been given any special attention at the local level. Involving experts at the local level who have a basic knowledge of the signs of pest infestation is one of the possibilities for a faster reaction to the sudden gradient outbreaks. Such an expert must be trained and regularly participate in seminars and meetings where s/he would learn about the risks and new harmful phenomena in forests. It can be an arborist who, through his/her basic training in field monitoring of urban trees, could identify and report the onset of symptoms. Seasonal inspection of forests and sample assessment, as well as verification with a scientific institution, should serve as a basis for quick processing of information on finding new damage, identifying the problem and determining control measures.

Recently, along with this kind of active surveillance, plant health authorities often make use of ‘passive’ surveillance, with citizens reporting the observed symptoms through ready-made platforms, using smartphones and devices (citizen science). It has been shown that this kind of effort can significantly improve the likelihood of early pest detection (Baker et al., 2018). Another way to identify the problem is through the applications that are available to the general public and that can help identify unusual changes and activate the pest identification system.

Whether considered individually or as a part of the forest complex, the high value of each tree should be considered in assessing the benefits of early detection of pests in forests. They have a distinct ambient value and their public benefit functions are especially related to tourism (they give us shade, smells, colour, sounds, and they prevent wind damage). Trees give a stronger sense of touch and connection with nature, and all this has been reflected in the increased tendency of citizens or tourists to spend their time in forests for health or recreational purposes. Recently, negative impacts on trees due to climate change, more frequently occurring invasive pests and anthropogenic damage have become more prominent. Trees in urban and ‘peri-urban’ areas are largely unmaintained, which results in frequent branch breakages, collapses, and generally inadequate safety. Tree care professionals (arborists) should be hired to examine and monitor forest health. With their regular inspections and records, they determine the tree’s state of health. In their work, they can use applications, such as the ‘green cadastre’, which simplifies the procedure and reduces the risk of spreading tree pests and diseases. The same staff could be involved in regular forest inspections. They could cover more local communities because the costs would be shared by the cities/municipalities through their joint efforts, or would be funded through the provincial/county/regional budgets. Another possibility is to hire the companies that provide tree health inspection services. This would also promote entrepreneurship in this sector, as it is currently underdeveloped, particularly in Croatia. Given that travel companies are expected to show interest in regular inspections of trees and forests, a part of the funds could be obtained through public-private partnerships. This is why community engagement is particularly important, meaning that citizens need to be involved and motivated for searching, finding and reporting on unusual phenomena on trees or in forests (citizen science). Applications are mostly available or may need to be further adapted, which normally does not require significant investment (e.g. EASIN). Costs would increase if the application had to be developed from scratch, but even then, the cities/regions can show shared commitment through joint efforts. In this sense, the biggest part of the cost would be organising workshops or forums where citizens would find out and learn more about the opportunities to participate in these activities.

To involve specially trained staff in the process of early detection of damage and harmful insects on trees and in forests, there should first be a consensus on cities/regions that would collaborate through joint efforts, as well as the needs regarding the number of trees and forest areas. The process can be completed in a year. Recruitment would follow early in the second year, and if cities/regions opt for external providers, a call for expressions of interest can be launched immediately.

The existing applications could be used immediately, and adaptations would be added according to newly identified needs over the next several years.

Citizen participation courses can also be offered in the first year, but they should probably be cyclically adjusted according to the needs, and evaluated data need to be presented (e.g. once a year).

We kindly thank dr.sc. Milan Pernek, Head of the Division for Forest protection and Game Management, Croatian Forest Research Institute, for all the help and support in preparation of this text.