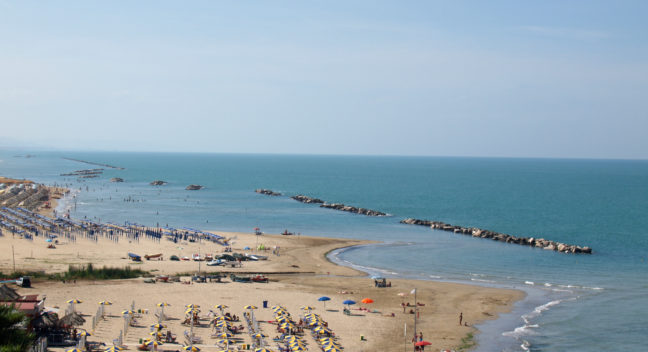 A groyne is a shore protection structure built perpendicular to the shoreline to reduce the longshore drift and to trap sediments (I, Γ, Y, ৲ configurations are frequently used). Since groynes induce an updrift beach expansion, and trigger a downdrift erosion, a series of groynes acting together to protect a beach (“groyne system”) is often needed, due to this domino effect. If applying groynes, it is preferable to do it together with the beach nourishment activities, to reach maximum positive effects.

Groynes are often constructed of rocks (because of durability, repairability, and ability to absorb more wave energy), but wooden groynes, steel groynes, rubble-mound and sand-filled bag groynes, or groynes made of concrete elements, can also be found.  In Croatia, natural-limestone material is often used.

Groynes are constructed more frequently on the western side of the Adriatic than on the eastern one, although in Croatia they have started emerging recently. They are among the most liked coastal protection structures by the stakeholders, since they allow fishing activities and sunbathing. Such functions can be improved by creating a pedestrian walkway on the crest, possibly protected by railings or stones (like at Cavallino, Veneto, and Pescara, Abruzzo), and, when necessary for hydraulic reasons, a small platform at the tip. One should be careful with the use of groynes, especially larger ones, because they have long lasting and often undefined wider impact on coastal processes.

A more recent alternative are submerged groynes, which have limited impact on the landscape and allow sediments to pass over them after the formation of a ramp. These sediments are deposited downdrift since the current velocity reduces after passing over the crest. Along the Adriatic coast this solution is not used, but submerged segments are added as extensions to traditional groynes, such as south of Eraclea Mare. More frequently, they reach emerged or submerged breakwaters and create a sort of a ”pond”, e.g. at Pellestrina (Veneto), Punta Marina (Emilia-Romagna) and Fano (Marche). They can be built with the same materials as the emerged ones.

A breakwater is often a shore-parallel coastal structure (usually of rock and rubble mound) projecting into the sea, that protects a shore area by reducing the wave energy. Detached breakwaters (offshore, parallel to the coast) are the most frequent shore protection structures along the Italian Adriatic coast, but rarely on the Croatian side. In Croatia the detached breakwaters are generally used as ship berths. In some areas of Italy detached breakwaters are quite common: e.g. North of Porto Garibaldi (Emilia Romagna) 74 detached breakwaters follow each other for 9 km of coast, between Porto San Giorgio e Casabianca (Marche) 61 elements protect 5.5 km of beaches, but the record is Pescara (Abruzzo), where 243 breakwaters cover more than 23 km of coast.

Breakwaters can sometimes be responsible for a lower water quality due to the poor water circulation. In addition, water exits from the gaps, creating strong rip currents that can even lead to causalities on the Mediterranean coast, although swimmers and divers think they are in a safe area. An additional negative aspect is their impact on the landscape.

Like groynes, newly-built breakwater structures are, as of recently, being submerged to reduce their visual impact and improve water quality. To be effective, their crest must be wide enough to dissipate wave energy, so that water piling-up produces fewer problems. This makes them more expensive, especially if built in deeper waters. Together with artificial reefs they can be a problem for the near-shore navigation.

In any case, a long-shore current is present between the beach and the detached breakwaters, which can carry sand out of the protected area. For this reason, submerged groynes are frequently added to reduce this current. The 8-km-long defence project of Pellestrina (Veneto) is based on this scheme, with groynes with submerged extensions every 550 m.

Both emerged and submerged detached breakwaters can be built of natural stones, concrete elements or geotextiles. Larger concrete structures in urban areas can be connected to the land with piers to transform them in promenades or sunbathing platforms.

Lower wave energy behind the breakwater and a converging sediment transport induced by wave diffraction at their tips, can trigger a salient formation. Long structures or ones close to the shore may see such salients grow and develop into a tombolo connecting the breakwater to the land.

Artificial reefs (or reef breakwaters) are rubble mound breakwaters of typically single-sized stones with a crest usually below sea level. Precast permeable elements are frequently used with the additional function of fish nurseries. They are usually constructed offshore (often parallel to the shore) in a continuous or segmented manner. Artificial reefs reduce wave energy and hence protect the beach from erosion. They are considered less intrusive and, depending on orientation, can have less impact on long-shore processes. Interreg Italy-Croatia project ADRIREEF aims at preparing a White paper on blue economy potential of Adriatic reefs. The Project also includes a specific plan for future funding projects in the forthcoming programming period 2021-2028.

Jetties consist of wooden, rock or concrete piles built into the sea to delimit and protect a navigation channel and enable the docking of ships. Sufficiently long jetties will limit siltation in an inlet or in navigation channels, thereby keeping sufficient depth within the channel. Although they rarely have predominantly shore-protective function, they affect the long-shore sediment transport and ecological processes: the longer the jetty is, the greater the impact it has on the adjacent areas. Jetties are not adaptation measures per se, but can be combined with seawalls or other hard coastal defence infrastructures. At river mouths, they can favour offshore sediment dispersion, thus impacting beach sediment budget.

Construction costs depend significantly on the structure dimensions, and are influenced by availability of suitable material; water depth at which construction is carried out; transport costs; and associated costs of beach nourishment, frequently required when building groynes.

In certain project performed in Italy the costs of 35 €/m3 for stones and 16 €/100 km/m3 for transport were estimated, although these numbers need to be taken with care, since larger stones are more expensive considering a parity of volume.