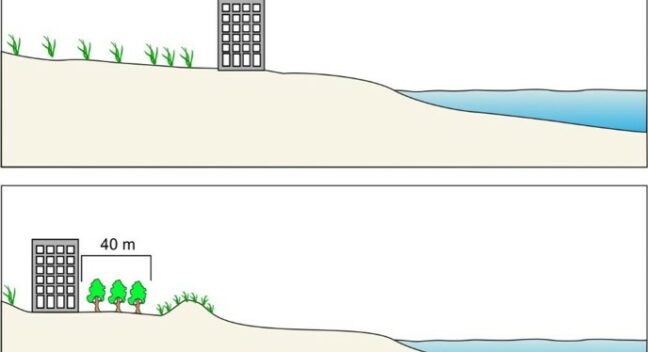 The rising seas are nowadays our reality. As sea levels rise, lower coasts are at risk of inundation, coastal storms occur more often, and coastal erosion and seawater intrusion are on the rise. Storms and cyclones that occur in the Mediterranean Sea have already had an occasional impact on our coasts. With the rising sea levels, the number of marine flooding through storms will increase extremely (Figure 1). One of the ways to save human lives and reduce economic losses in the coastal areas is to implement managed retreat.

Managed retreat, also known as managed realignment, is a deliberate process that allows flooding of a currently defended area, which reduces both coastal flooding and erosion (Zhu et al., 2010). Technically speaking, it involves moving defence inland in order to allow intertidal habitats to reclaim coastal areas for defence (UNEP, 2016). The benefit of creating intertidal habitats lies in the fact that they are known to be highly effective in attenuating wave energy. This helps to reduce offshore sediment transport and therefore erosion. Intertidal habitats also form dense root mats, which increase the stability of intertidal sediments, helping to reduce erosion rates. In most cases, managed retreat is technically implemented by creating coastal wetlands. By now, the habitats mainly used in managed retreat are salt marshes, a type of coastal wetlands predominantly shaped by tidal processes. This is mostly the case in North-West Europe and North America, but the creation of other wetland habitats is possible by implementing retreat. The necessary conditions to undertake managed retreat are the presence of existing defenses and of low-lying land to be abandoned for intertidal flooding, a will to improve defence systems, opting for sustainability-oriented management, and awareness about the benefits of managed retreat.

Having said that, it is important to note that, strictly speaking, we can have all the ingredients for a successful managed retreat. However, managed retreat is not an easy task at all. Personal, social and political reasons have a role in this adaptation option. Managed retreat requires land to be returned to the sea, which has both monetary and non-monetary cost. Local population can be attached to their territory, claimed and maintained for centuries, and this cannot be neglected. When selecting sites for retreat, therefore, the public acceptance and understanding of local stakeholders are crucial. The conflicts over land mostly arise when managed retreat requires relocation of culturally important monuments or reclamation of agricultural land (Fletcher et al., 2013). For this reason, a participatory approach and dialogue with landowners and stakeholders are crucial. Compensation for loss of land and enforcement of policies are important for reducing potential conflicts (Roca and Villares, 2012).

A similar lesson comes from a coastal risk management learning project of Fairbourne in Wales. Fairbourne is currently defended from the sea on both its estuary and coastal frontages, but rising sea levels mean that much of the village would be below normal high tide levels within the next 50 years. This community had been identified in policy terms as the first in the UK without a sustainable future, since the Shoreline Management Plan policies for periods 2055 to 2105 may require a part, if not all of the village, to retreat or disperse to a different location. Action learning has been largely informal and the project team has worked with local stakeholders throughout the project. It was concluded that the ownership of the Masterplan was critical to its success, since the plan must belong to the community. The local population, as well as the community council, fiercely opposes to retreat, and the place attachment they feel towards Fairbourne is more than understandable, as explained by the council’s vice chair: “You decommission a factory or something like that. We are not a factory – the village is full of humans who have spent their life’s money to come and live here because it is such a beautiful place”. Still, when we consider the well-being of young people, building their future in Fairbourne, buying or building houses in Fairbourne, would not be a very wise decision. One could say that for the youth of Fairbourne this kind of decision is fair and timely. Managed retreat cannot be done without a close partnership with the local community, all generations should be involved or represented, and strong political commitment should be secured. There are strong emotions at stake, but they are not the only thing to consider, since the accompanying adaptation funding needs to be provided, too.

Still, there are many advantages of managed retreat. As mentioned above, managed retreat tackles coastal flooding and erosion. The cost of protection can be significantly reduced compared to engineered hard defenses. In addition, managed retreat and new intertidal areas store carbon dioxide and methane emissions within the sediment deposits and therefore mitigate climate change impacts, improving sustainability and societal resilience. These intertidal areas create the potential for new habitats for biodiversity, promoting ecotourism and recreation. Last but not least, these areas can also help maintain water quality and avoid saltwater intrusion due to inappropriate land use (Zhu et al., 2010). Finally, managed retreat is not necessarily applicable and useful to all environments so it is important to carefully evaluate specific locations before opting for a retreat.

Are we going to wait for another storm, Jadranka or Adriano, to cause the death of people just because we are ignoring the coastal risks? Or shall we rather pull away from the coastline when possible, and retreat inland?

The experience of managed retreat is the most significant in high-income countries, where the main cost is usually the cost of purchasing the land that would be flooded or relinquished. Additional factors affecting unit costs of managed retreat include required compensation to land users, the cost of dismantling human-made structures present on the site, required defenses to protect the hinterland, human resources including expertise, and frequency of monitoring. For example, the average cost of managed retreat in the UK was approximately $97,000 per hectare, at 2009 prices. In 2002, managed retreat was undertaken at Abbotts Hall Farm in Essex, UK, on a total area of 0.84 km2. The final cost of the project was $7.7 million (Zhu et al., 2010). In the Mediterranean, a more recent project and the largest operation of managed retreat in the region was the case of lido Sète-Marseillan in Occitanie, France. The project was classified as a Major European Project in 2010, with a total investment of €55 million for a lido strip of 24 km2.

Even if it was initiated for different reasons, managed retreat of the coastal road between Koper and Izola has been implemented in Slovenia. The construction of the express road section Koper-Izola was state-funded, in the framework of the National Programme for Motorway Construction. The temporary arrangement of the road after its closure for traffic cost approximately €1 million. The funds were provided by the Municipality of Koper (around €800,000) and the Municipality of Izola. The exact estimate of the cost of the long-term arrangement of the former road is not possible in this phase, but it will be in a range of a few million euros. The assessment of the investment, which was given in the completed feasibility study, is just under €5 million and includes the preparation of the spatial and project documentation, communal infrastructure arrangements (plumbing, sewerage, traffic arrangement, biking lane, public lightning), filling the terrain, promenade and bathing area arrangements, and the establishment of an underwater archaeological park in situ.

There are also some forms of retreat implementation detected in low-income countries. The first tourist structures in Varadero, Cuba, were built at the end of the 19th century as close as possible to the shoreline. From 1987 to 2012 the coast of Varadero was artificially nourished with sand quarried on the continental shelf; this allowed to maintain beach without hard structures notwithstanding the erosion induced by several hurricanes. At the same time, strategic managed retreat was initiated, demolishing constructions and rebuilding them inland, at least 40 m behind a reconstructed dune (Figure 2). When hurricane Irma severely hit the coast in Varadero in 2017, the sectors where retreat had previously been enforced have not experienced significant environmental and economic damages.

Finally, managed retreat is an adaptation option for built-up coasts where the value of real estate does not economically justify the construction of expensive protective structures. It is expected that this will be the most economically viable option for linear coastal development, as well as for individual buildings on natural coasts. Managed retreat can generate savings and create better living conditions for future generations. It reduces coastal risks by relocating exposed people, property and human activities outside the coastal risk zone.

To get the greatest benefits from managed retreat, the implementation must be carefully planned. Pre-implementation monitoring and modelling will help maximise the benefits of managed retreat. Also, effective stakeholder and local community engagement are essential to its successful implementation. Finally, significant barriers to implementation include the availability of land, as well as legal and financial difficulties. In the example of Abbotts Hall Farm, UK, the pre-implementation phase took three years, and some parts of the site had been subject to regulated tidal exchange for seven years prior to seawalls breaching. Monitoring was continued at the site as post-implementation activity, in order to detect a possible negative impact on the environment. In 2002, managed retreat activities took place and by 2010, the site has become a rich habitat for birds and fish (Zhu et al., 2010). In the case of lido Sète-Marseillan, a large project was implemented over the 12-year period, from 2003 to 2015, to help the beach reclaim its natural rhythm. The implementation measures are intented to last for over 30 years.