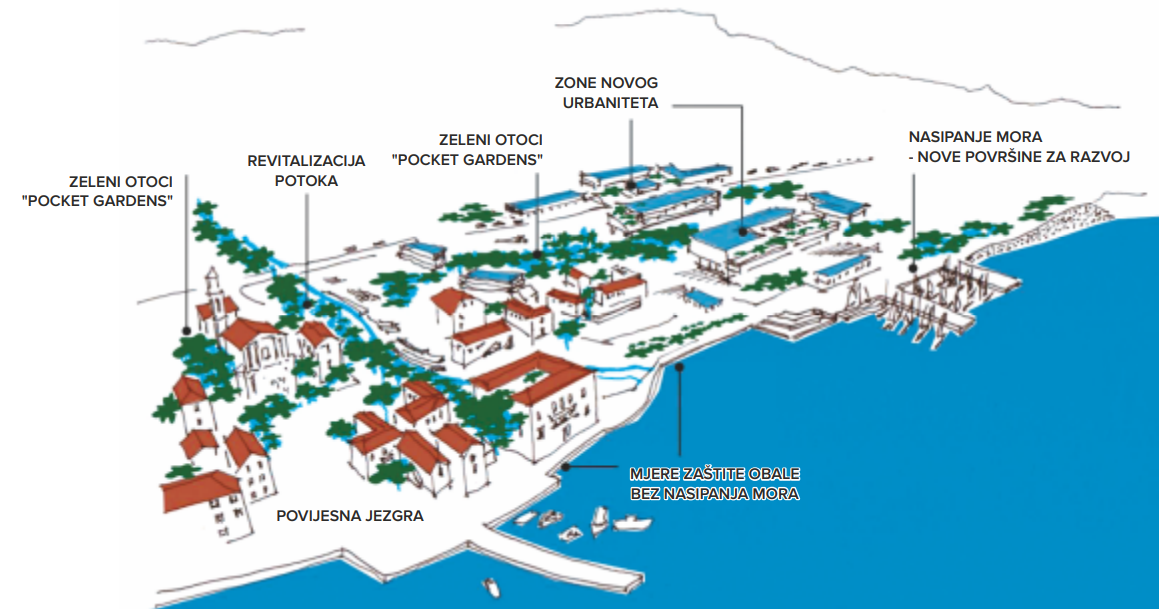 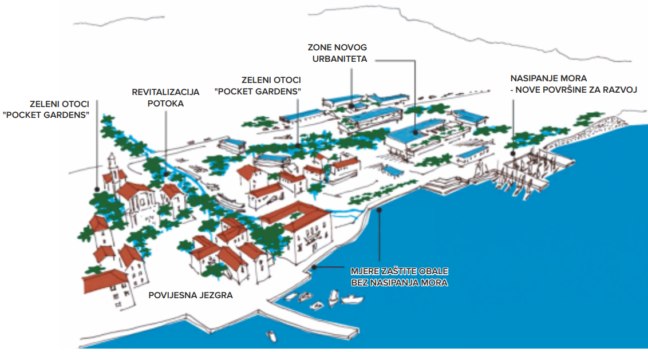 The coastal plan covers the administrative area of the Town of Kaštela. The mainland makes up 58 km2, and the coastal part is sheltered by the Kaštela Bay. The length of the coastline is 23 km and almost all of the coast has become increasingly urban. The historical development of this town is associated with medieval castles located on its shores. The town’s rapid growth, and industrialization followed by urbanization, which has not been accompanied by appropriate utility infrastructure, caused sea, air and soil pollution. Nowadays, with deindustrialization and building sewerage infrastructure, the situation has improved considerably. The quality of bathing water sites has returned to normal and Kaštela is increasingly turning to tourism. Much of the tourism development in the area is promoted by its location between two strong tourist destinations, Trogir and Split, as well as the airport proximity. Today, Kaštela has a population of approximately 40,000 people and is part of the Split agglomeration.

As we become more aware of the undesirable consequences of climate change, we must face the fact that coastal areas are particularly affected. This is what things are like in Kaštela, with many important development resources and valuable cultural and residential buildings across its low-lying coastline area: castles, the town’s historic centres, seafront promenades, houses, infrastructure, etc. The most important impacts of climate change in the wider area of Kaštela include the rising air temperature throughout the year, changes in precipitation patterns (more precipitation in winter and less in summer), increasing variability and weather extremes, e.g. more intense and more frequent storms.

The location, topography and socio-economic situation in the Kaštela area are extremely unfavourable when it comes to the effects of climate change. The coastal area is low-lying, and for the most part, it was created by the constant expansion of land at the expense of the sea. As such, it is susceptible to flooding from both the sea, streams and runoff water flowing from the mainland. The coastal hinterland is steep and lies in a high-energy coastal environment. In the case of rain and water inflow, large volumes of water will be formed quickly in the hinterland flow through the settlements and go straight to the seashore, flooding low-lying areas that may also become submerged by seawater. The area of Kaštela, and especially the low-lying coastal area, is exposed to more extreme flooding. It is caused by climate change, poorly planned urbanization and inefficient surface water drainage and coastal protection systems. Torrential waters from the hinterland, urban runoff water and high sea levels and waves crashing against the shore threaten the town. Sea levels are projected to rise by 30 to 100 cm over the next 100 years. With torrential and runoff water, severe and more frequent flooding of the town is inevitable, especially in the coastal area.

The most endangered coastal area up to 1 m above sea level covers 28 hectares of the coastal zone. It is an urbanized area with about 600 buildings. Out of this surface area, 12 hectares are covered by protected historical centres with the most valuable cultural heritage and property. The most endangered examples of protected cultural heritage include Kaštel Cippico (only 35 cm above sea level), Kaštilac Gomilica (60 cm above sea level) and the historical centre of Kaštel Sućurac (60 cm above sea level). The entire 23 km long coastline is also under threat, half of which has been paved over with concrete waterfront structures and small harbours. Damage will get worse, movable and immovable property will deteriorate due to water damage and/or flooding and they will gradually lose value. In addition, the quality of life of its population will decline. The floods will wash the pollution into the coastal waters, increasingly wreaking havoc on its ecological, social and tourism value.

The coastal area is currently struggling with inadequate road infrastructure, public areas, sewerage, waste sorting and collection facilities, poor water drainage system, unsatisfactory coastal infrastructure for environmental protection (coastal erosion and flooding), etc. Inadequate capacities are most pronounced in summer, when many tourists who stay in private accommodation use this infrastructure (with 90% of tourists staying in private accommodation). Further urbanization and urban planning based on concrete construction reduce green spaces and are linked to many negative impacts, starting from increased rainfall that requires more drainage to the urban heat island effect and the impact on human health. The natural environment, the quality of the coastal sea and ecosystems have become increasingly threatened. It is becoming increasingly difficult to run management processes in which citizens, entrepreneurs and managers are involved. It is necessary to take coordinated action from the root of the problem, for example, the border of the maritime domain has not been established on a large part of the coast, which is a thing that makes management so difficult. Therefore, all this presents a challenge in terms of coastal management, to which should be added climate change impacts and quality planning of coastal zone development.

The following objectives lie at the heart of the coastal zone development:

The project is a pilot activity of the CO-EVOLVE project – Interreg MED and defines the development of an action plan based on integrated coastal zone management and maritime spatial planning (ICZM/MSP). The general objectives of this task are based on the “Protocol on Integrated Coastal Zone Management”, Directive 2014/89/EU “Establishing a framework for maritime spatial planning” and the UNEP-PAP/RAC document “Sustainable Coastal Tourism”. The project activities started in August 2018, and the draft Coastal Plan was presented to the public in May 2019.

Based on the previously set three objectives and identified key issues, priorities, measures and activities have been developed.

The measures adopted in order to achieve the first objective regarding the implementation of the integrated coastal zone management are: determining the boundaries of the maritime domain, strengthening the resilience of coasts and infrastructure to climate change by combining traditional and green solutions.

Traditional solutions for strengthening the resistance to sea flooding have been provided. These include the construction of seawalls with breakwaters, raising historic town centres to combat sea level rise and measures combining exposed jetties with new beaches that will be able to reduce the impact of waves. Green solutions have been provided to improve the flood resistance. Green solutions for stormwater drainage in urban areas include water retention and natural purification, regulation of streams that keep water in the natural environment for as long as possible, and mountain torrent water control by trapping it behind dams or in solid reservoirs. Special emphasis has been put on the need to redefine the concept of urban stormwater management by mimicking the natural water cycle in the built environment. This concept is known as the “sponge city”.

Finally, the key determinants of spatial planning in the most valuable coastal zone have been adopted, in order to protect the architectural heritage, improve the quality of the built environment and reduce land consumption. This encourages solutions for the limited and controlled land reclamation, the principles of green infrastructure and green construction in the new urban zones along the main road.

The Coastal Plan has been developed as a result of several activities within the project signed between Public Institution RERA S.D. for Coordination and Development of Split-Dalmatia County as the client and the Faculty of Civil Engineering, Architecture and Geodesy, University of Split as the contractor, with the support of the Town of Kastela and the Kaštela Tourist Board.

The Coastal Plan draws on many strategic and planning documents, as well as information from the existing body of research, expert knowledge and stakeholder participation, and offers a new perspective on space through the prism of climate change. PAP/RAC experts participated in the process of preparing the Coastal Plan, drawing on this experience in their everyday work in other Mediterranean countries, as well as in the implementation of related projects, such as the Adriadapt project.

As the participatory approach lies at the heart of ICZM, the participatory process was an important pillar in the preparation of the Plan. The integrated planning methodology includes a participatory approach from the very beginning of the project. This brings two benefits: the insights, needs and priorities of the stakeholders are taken into account during the development of the plan, and the plan gains more legitimacy because the stakeholders perceive it as a document they helped create.

A stakeholder is defined as an individual or group that has an interest in the development of a plan or that may be potentially affected by its implementation or outcomes. The analysis identified “primary” and “secondary” stakeholders, depending on the nature of their involvement in the initiative. Primary stakeholders are those that stand to be directly affected, either positively or negatively, by the initiative (or the problem it seeks to address). The primary stakeholders participating in the development of the Coastal Plan are divided into stakeholders performing economic activities in Kaštela (companies and craft businesses) and the population (individuals and associations). Secondary stakeholders are those “acting as mediators”, such as other organizations in the same or a related area, policymakers, local government, experts or employees working in the public sector and having management responsibilities. A total of 80 stakeholders were identified and invited to participate in the development of the Plan. In addition, academia became involved too, as students were engaged and mentored by experts from the plan development project team.

Communication with stakeholders was maintained through workshops. A total of five participatory approach workshops were organized to address key topics and a draft Coastal Plan was presented on this occasion. The workshops were organized in such a way that the moderator briefly presented the topic, which was followed by a discussion with stakeholders who shared their expertise and their wishes in relation to the local situation. Minutes represent a record of the discussions, and reports serve as a reflection of workshops. In addition, during or after the workshops, stakeholders were asked to complete the Questionnaires in order to validate expert insights and provide additional information, as well as propose further measures and activities.

Human resources: In the Town of Kaštela, 10 people from the Administrative Department for Physical Planning and Construction and the Administrative Department for Communal Affairs, Legal Affairs and Environmental Protection were actively involved in this activity. RERA organized four workshops and one conference with approximately 150 participants.

In terms of funding, Interreg project support amounted to approximately € 100,000, which does not take into account the support provided by local authorities.

The implementation of the Coastal Plan brings benefits through three groups of key management policies: building resilience to climate change in coastal communities, sustainable spatial development and the development of sustainable tourism adapted to the specific characteristics of the area covered by the plan. Besides improving the environment, the proposed measures contribute to the conditions meant to improve social cohesion. Measures aimed at improving the quality of the built landscape at the same time aim to contribute to flood and stormwater management. Measures related to green infrastructure help create the conditions meant to improve the quality of life by improving the quality of public space enjoyed by the local people. This Plan seeks coherence between public and private initiatives, and an integrated approach ensures that all adaptation measures take into account the creation of favourable conditions for climate change mitigation. Measures are proposed to increase the resilience of the local economy, strengthen the green and blue economy, improve mobility, etc.

Following completion of the Coastal Plan, its summary was published, as well as a guidebook for homeowners “What can citizens do? Flood protection”.

The preparation of the Plan took 10 months. The Plan will be used to frame the policies until 2030, while the developed climate change projections and scenarios cover the period up to 2100.

Head of the Administrative Department for Physical Planning and Construction