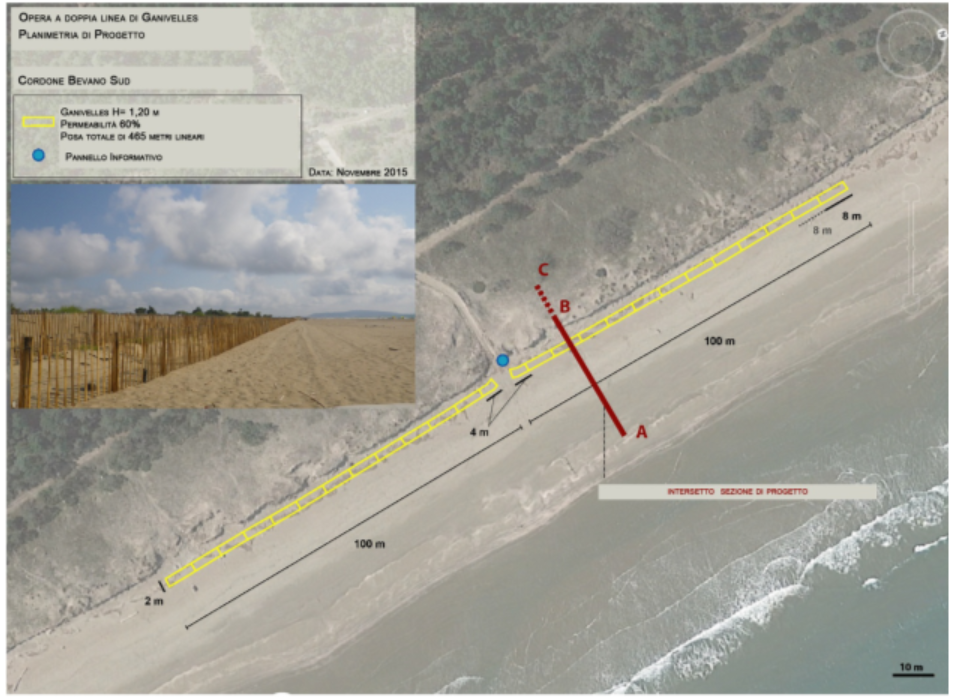 HomeCase StudiesGreen optionsRestoration of the dune belt in the south of the Bevano river mouth (Lido di Classe, Ravenna, Italy) 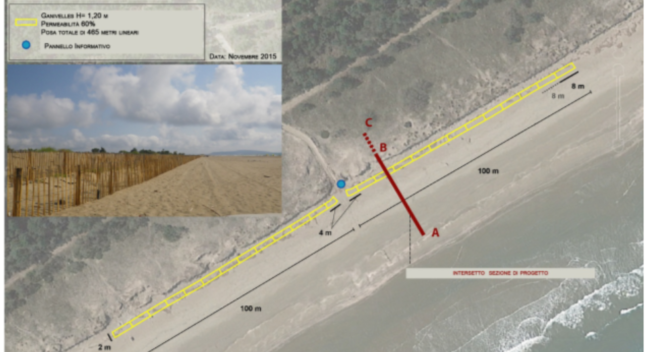 The site is located in the south of the Bevano river mouth, between an integral protected area, where access by unauthorized persons is forbidden all year round, and an intermediate protection zone, forbidden for access from April to July during the nesting period of the Kentish Plover (Charadrius alexandrinus). The anthropogenic pressure on this area is almost non-existent. The site is a Natura 2000 site, a protected area of the Po Delta Park; a SCI (Council Directive 92/43/EEC “Habitat” on the conservation of natural habitats and of wild fauna and flora. OJ, L206, 22/07/1992; pp. 7-50) and SPA area(Council Directive 79/409/EEC “Birds”on the conservation of wild birds. OJ, L103, 25/04/1979; pp. 1- 27); and a Ramsar area (UNESCO, 1971. Convention on Wetlands of International Importance Especially as Waterfowl Habitat).

The beach is about 30 m wide, with a sinuous longitudinal profile with wide and articulated intertidal zones. The beach stretch of interest is classified as “stable” according to the regional ASPE classification. The area is free from robust defence structures and has not been subjected to beach nourishment in the past. The area is classified as P3 in the storm surge hazard scenarios, i.e. subject to frequent flooding with a 10-year flood frequency. The subsidence rate in the area is about 7-8 mm/year.

The partial fragility of the dune system before the intervention was due both to the limited width of the beach, which is why embryo dune accumulations formed but did not resist the strongest sea surges, and to the cliff-like morphology of the front dune, which was constantly subjected to erosion.

This intervention is a final activity within the project “Riged-Ra – Restoration and management of the Ravenna coastal dunes (2013-2016)”. The main objective of the project was to define and identify the main coastal dynamics, erosion status and vulnerability of the Ravenna coast, from the Reno to the Savio River mouths (Ravenna, Emilia-Romagna, Italy), and of the related dune remnants, by defining suitable intervention strategies for their protection and restoration. The final deliverable of the project included intervention strategies for coastal dune conservation in the form of Guidelines for local authorities who are directly involved in coastal zone management and planning.

The construction of the windbreak fence, on the other hand, aims to reduce wind speed so as to favour sand deposition; to favour the creation of embryo dunes; to prevent sand loss towards the hinterland; to prevent trampling; and to give an opportunity for ecosystem recovery.

Selection of one or more adaptation options from the AdriAdapt catalogue.

1) Identification and characterization of the area based on the integration of the data collected during the three years of the project implementation:

Project: Installation of a grid of windbreak fences (ganivelle) parallel to the coast, held together by galvanized and twisted iron wire. The first line was positioned at the dune foot; the second line is about 2 m from the first line towards the sea; the two lines are connected by perpendicular portions, every 8 m (‘mesh’ technique). The intervention stretches across 465 m.

The ganivelles are fences made of chestnut (chosen for its resistance), whose purpose is to block the wind loaded with sand and consequently favour its accumulation to recreate the dune. They are therefore used to favour the creation of embryo dunes; to reduce the erosive effect of the wind and in general in the discontinuities of the dune system; to prevent the transport of sand towards the inland, sediment that would be definitively lost from the coastal sedimentary cell;  and to prevent access and trampling on the dune. Interventions are often coordinated with planting so that after the disappearance of the structure there are already plants, ready to replace the ganivelle. In any case, the vegetation finds more favourable conditions for a natural colonisation and, as it evolves, it contributes to the development and stabilisation of the dune. In this case study, no planting was carried out due to the large presence of dune-building species. The intervention must favour the progressive and almost total silting up of the wooden fences. The only critical element is the presence of metal binding wire; due to its limited degradability, in the case that the structure does not get covered by the sand or if it gets demolished, the wire will remain on the surface. A possible alternative could be ropes made of plant material (however, they are usually of poor durability and unavailable on the market) or, even better, transversal poles.

The placement of the work must be well designed according to certain criteria:

The optimal period for carrying out the intervention was thought to be March because it comes at the end of the winter period, the period of critical meteorological and marine events (strong storms and sea surges), and also because the intervention had to have the time necessary for its initial stabilisation before the following winter.

For the installation of the removable structures for dune protection and reconstruction, it was decided to reduce the use of mechanical equipment to a minimum, giving priority to manual intervention as far as possible.

After installation, the site was monitored quarterly using digital photogrammetry techniques from UAV survey and 3D laser scanning, to assess the effectiveness of the intervention, estimate sediment accumulations and geomorphological evolution of the dune belt.

The RIGED-Ra project is the result of a research agreement between Eni E. & P. Division, Flaminia Foundation, the Municipality of Ravenna and the IGRG (Integrated Geoscience Research Group) laboratory of the University of Bologna, Ravenna Campus.

The intervention on the dune was designed and coordinated by the IGRG lab, together with Dr. Carlo Alfonso Lipparini, and in collaboration with EID_ Mediterrenée (Dr. Hugues Heurtefeux), a French public company operating in the environmental field since 1982.

Permits and authorizations for the intervention were issued by the technical offices of the Municipality of Ravenna, Carabinieri for Biodiversity, and the Po Delta Park, which are the managing bodies of the study area.

There was no involvement of stakeholders other than those mentioned in points 6 and 14 of this document.

The detailed characterization of the physical system, in all its components (geomorphological, geological, hydrogeological, vegetational, meteorological-marine), was fundamental to design, scale and guide correctly the structure and increase its effectiveness.

The involvement of the managing authorities of the area and the creation of a multidisciplinary working group with experts in different fields of environmental sciences ensured an integrated approach to the management of the coastal belt.

The limiting factors that partially hindered the process: bureaucracy and time necessary to obtain authorizations and permits; economic availability to extend the intervention to a wider area; limited involvement and awareness of other key stakeholders, such as beach users and owners of bathing facilities.

The project was financed by Eni Divisione E. & P. according to the provisions of the “VI collaboration agreement between the Municipality of Ravenna and Eni S.p.A.2011- 2014” and activated within a specific research agreement between Eni and Flaminia Foundation.

The physical characterization of the system took about a year; the design, permit and authorization procedures, and the implementation and installation of the structure took a year in total.

After the phase of physical characterization of the system, in order to evaluate the real potential of the intervention, a workshop was organized with the participation of some of the technical staff involved in the project (IGRG, EID_ Mediterrenée). Inspections were carried out in the study area for technical and logistical evaluations in order to draw up the technical report that needed to be delivered to the competent technical offices (Municipality of Ravenna, Carabinieri for Biodiversity, Po Delta Park) to obtain the necessary permits and authorizations.

Before carrying out the work, it was necessary to carry out an inspection with the staff of the Carabinieri for Biodiversity for general checks and identification of the Kentish Plover nests. The transport of material, the laying of the structure and the safety signs took about 15-20 days.

To this day (2021) the intervention has not required maintenance and has been preserved in excellent condition, as well as having proved to be very efficient in promoting the accumulation of sediment and therefore the natural growth of the dune (blocking blowouts, advancement of the dune foot, formation of embryo dunes, decrease in the slope of the dune front, increase of the dune crest).

Corrigendum: the subsidence rate in the area is about 7-8 mm/year and not cm/year as stated in this paper.