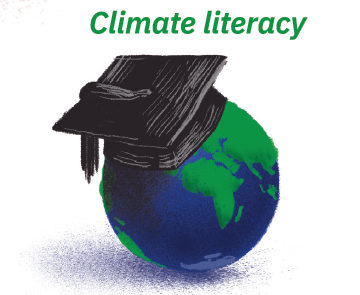 Climate change is approaching the point of no return and is thus the greatest challenge currently facing humanity. This is the message sent by institutions such as the UN and the World Meteorological Organisation (WMO), scientists in petitions and children in the streets. Let us, therefore, ask ourselves what we actually know about climate change.

A climatically literate person is defined as a person who:

a. understands the basic principles of the planetary climate system;

b. knows how to get scientifically plausible information on climate change;

c. communicates on climate and climate change in a clear and understandable way; and

d. is capable of taking well-founded and responsible decisions regarding actions that can affect climate, as well as the resilience of the community to the changes that are already here (adapted from NOAA, 2009).

On average, people know very little about the causes and consequences of climate change. For a vast majority, it is all hazy, large and distant, both in time and space. The most common, occasional source of such superficial information are media reports on shocking events related to climate change, such as when wildfires over vast territories in Australia or California, but also in the vicinity of Split, or when erosion “eats” into low Italian coasts for years, or when floods take away houses and people, as happened recently in Italy and France.

The term “climate literacy” is still insufficiently present in everyday life, it is not used, it is not spread socially, let alone having in action systematic climate literacy programmes as a social-educational process. A question arises whether anywhere in the world they systematically teach in elementary and secondary schools about sustainable development, global warming, climate change and its dangerous consequences for the people, assets, survival. For the moment the answer is, mostly, no! (In November 2019 information came from Italy that they plan to introduce to Italian schools, starting in autumn of 2020, the subject “Sustainable development and climate change”. That initiative came from the Ministry of the Environment, i.e. the Minister himself. Unfortunately, already in December 2019 the Minister left the Government and it is assumed that it put the end to the initiative.)

The UN partnership for teaching on climate change (UNCC LEARN) has been founded in 2010 as a cooperation initiative of more than 30 UN bodies, aimed at building global literacy on climate change, and as assistance to countries to design and implement systematic and periodic strategies of teaching on climate change. In 2014 an online platform https://www.uncclearn.org/ has been launched that has now become the principal global source and so called  “one-stop-shop” for UN content on climate change and green economy. At present, 30 courses on these subjects are available on the platform, and this year 100000 candidates have received certificates on completed courses.

In 2006, the American NOOA has offered The Essential Principles of Climate Literacy for individuals and communities that wish to understand the Earth climate, effects of climate change, and approaches to adaptation to and combating climate change. Those principles can serve as stimulation for discussion, or starting points for scientific research.  When speaking of literacy building for children the EU project Climate literacy of 2017 has left valuable learning resources on its web pages. There we can find 8 modules for learning about the basics of climate change and causative human activities, as well as areas for the transformation of the society aimed at mitigating climate change. Within that project, a selection was made of materials for elementary and secondary schools, as well as for institutions for the education of adults. The material has been prepared in a way adapted to a horizontal introduction into various school subjects within the regular learning activities. Particular attention was paid to the use of modern learning techniques such as games, various activities, exercises and more complex projects. Those materials are also intended for other citizens who are interested in improving, in an easy and entertaining way, the understanding of their personal ecological footprint, energy consumption in their household, or how to shop in a sustainable way. For that purpose, there is also an application for mobile phones. In Croatia, the association DOOR in cooperation with the 10th Grammar School of Zagreb implemented the project „Škola za klimu“ (School for the Climate) with the aim of contributing to better information of pupils. The project was concluded in 2018 and has left behind 2 manuals, one for the teachers at secondary schools and the other for the pupils.

These three lines of activity would permanently strengthen insights and capability of the population and their active adaptation and greater resilience to climate change consequences at the local level.

Today, resilience is low and concrete consequences of climate change always catch us as bigger or smaller trouble which causes damage to health, property, regular living and sometimes even lives of people. Some damage is quiet, slow “creeping” but dangerous, expensive and adverse to the quality and habits of living for the local population. It is difficult to assess the total cost of the systematic establishment of the three mentioned forms of educational activities. Those costs would be lowest if those activities were organised at the EU level, i.e. if the materials were prepared by the IPCC or partnerships such as United in Science. Of course, national initiatives, such as the one that was announced by Italy, would be financed from the national budgets, or could, perhaps, be a project with international funding, such as Climate Literacy, but with partners such as the national education agency providing a guarantee that the produced materials would be used.   Regarding the benefits, let us point out that in anticipation of the UN Climate Summit 2021 a campaign urging all governments to introduce climate change literacy as a central axis of school curriculum was launched. This campaign was initiated by an NGO,  EARTHDAY.ORG, and is supported by UNFCCC, as well as numerous other organisations and institutions. Among the cornerstones on which this campaign is based a research stands out published in 2020 in PNAS Otto et all. in which education has been recognised as one of the crucial social turning points for achieving the goal of stabilising the global climate by 2050. A poll performed in 80 countries by World Wide Views in 2015 showed that 80% of the respondents thought that education on the climate was the strongest policy for emissions reduction. Apart from the above, education on climate change is crucial for redirecting the overall teaching and learning to the situation of climate crisis in which we currently are, on which there is a clear and wide consensus (see Reid 2019). It remains to be seen if the next year’s UN Climate Summit will result in a decision regarding systematic activities on education on climate change.

The introduction of the above-described new education system as an adaptation measure would take five years. So, it could be introduced step by step and spread and strengthened until a satisfactory, mature level in the period 2021- end 2025.

We kindly thank dr.sc. Vladimir Lay for the help and support in preparation of this text.