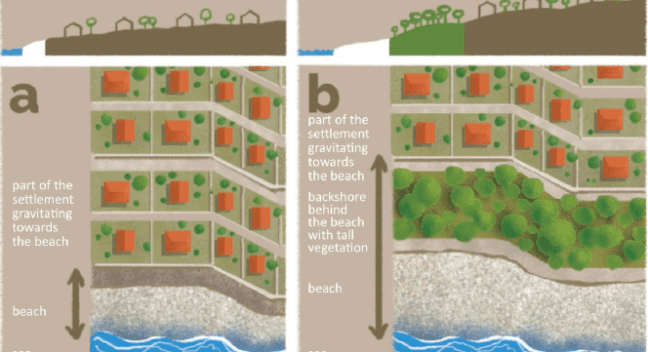 A coastal setback zone is a buffer area where certain or all types of development are prohibited or significantly restricted. A setback zone is usually defined by a specific distance from the shoreline, where the shoreline is often featured by the highest water mark or permanent vegetation line. The main functions of the coastal setback zone are to provide coastal protection by protecting people and human settlements from coastal flooding and erosion; support the coastal economy (beach economy, tourism and recreation); and preserve biodiversity and maintain the natural functions of the beach.

Coastal setback zones provide coastal protection by reducing the number of assets (e.g. houses, infrastructure, and businesses) in areas susceptible to coastal hazards, which are expected to increase with climate change. In other words, they provide a buffer to coastal flooding and erosion. Coastal setback zones ensure open public spaces and access to the shoreline which increases the opportunity for the development of tourism, beach economy and recreational activities. Implementation of coastal setback zones, especially when performed together with dune reconstruction and/or wetland restoration, also creates the potential for new habitats. This is in line with their protective function: for example, setback zones provide space for wetlands and other vegetation, which can attenuate wave action. There are other benefits of implementing coastal setback zones related to additional ecosystem services, such as maintaining the water quality and allowing erosion and accretion cycles to occur naturally, thus retaining sediment budgets. Finally, setback zones can have a multifunctional role, and be a part of the EU policy that promotes the use of nature-based green and blue infrastructure, improving environmental conditions and mitigating negative effects of the built environments in cities.

Coastal setback zones are used as coastal zone planning instrument in a wide range of countries (Table 1) i.e. many countries have policies that require new buildings to be set back a certain distance from the sea.

In the Mediterranean, the Protocol on Integrated Coastal Zone Management (ICZM) of the Barcelona Convention (adopted in 2008 and entered into force in 2011), identifies a setback zone of a minimum 100 m width from the shoreline as the agreed measure to protect coastal settlements and infrastructure from negative impacts of coastal processes (Article 8 of the ICZM Protocol). Article 8 explicitly mentions climate change as a major issue to be addressed. The setback zone can be wider than 100 m and it can include protected and adjacent areas. Connecting setback zones with neighbouring areas, such as wetlands, floodplain ecosystems, or natural forests, permits additional recreational areas, restores biodiversity and can serve as a nature-based solution to mitigate climate change effects.

The Protocol is the first international legal instrument that lays down the requirement for use of coastal setback zones. Its implications for the implementation of coastal setback zones vary depending on the coastal management settings in different countries across the Mediterranean basin. In certain cases, it could be even dictated by a minimum elevation above sea level above which development is allowed.

However, Article 8 allows several exceptions in the establishment of coastal setback zone, i.e. “for projects of public interest” and “in areas having particular geographical or other local constraints”. The European Union ratified the ICZM Protocol in 2011, while in Croatia it has been in force since 2013. In Croatia, different restrictions in construction within coastal belt have been prescribed since 2004 by a specific Regulation on arrangement and protection of the Protected Coastal Area (PCA). Today, the PCA is defined by the Physical Planning Act, including all the construction restrictions prescribed by law. Italy signed the ICZM Protocol in 2008, but hasn’t ratified it yet.

Implementing coastal setback zones can be a subject of controversy since municipalities are very reluctant to modify their plans and many times setback zones are seen as a “loss” of potential for development on the attractive territory. Conflicts over land ownership can also complicate the situation further in terms of coastal setback zones as a policy measure. It is often overlooked that setback zones are not only a way of proactive planning for climate change adaptation, but that they also bring substantial benefits through valuable additional space for recreation and beach activities. That is why dissemination of knowledge, involvement of landowners and stakeholders, public acceptance, and consideration of compensation for loss of land are important prerequisites for successful setback implementation.

Although setback zones are laid down in coastal regulations of many countries, they are often poorly enforced in practice. However, with the new EU Adaptation Strategy calling “to ensure that regulation and funding take into account disaster risk to avoid creating new exposure…” further construction of the narrow coastal belt should be reduced to a minimum.

Although coastal setback zones have their costs, they are generally considered a low-cost alternative to hard coastal structures (such as sea walls or dikes) and also help preserve natural shoreline dynamics. Setback zones thus create a natural buffer that diminishes the need for a structural approach.

The costs of implementing a coastal setback approach will be variable, depending on local conditions. In some areas of particular public interest, the agreed measure of 100 m setback zone cannot be enforced. Costs involved in making this decision include the collection and analysis of historic erosion rates or water levels, the costs of purchasing modelling services (e.g. for modelling likely shoreline evolution) and expert consultation. Benefits of the new public spaces for recreation and tourism are to be added to the calculation.

Finally, enforcement is essential. The cost of enforcement may, however, be low as it is possible to enforce setback zone via pre-existing local planning bodies. Additional costs may be incurred if private landowners in the setback zone are compensated for their property. Implementation of a setback policy is likely to have the lowest costs when implemented proactively, before any significant, inappropriate development occurs. In this way, it should be possible to minimize compensatory payments to private landowners.

The USA, the UK and France are among the most advanced countries in the application of coastal setback zones. UK’s Department for Environment provided funding for flood and erosion risk management and developed detailed guidance on how to do the cost-benefit analysis and how to detect households at imminent coastal risk. In France, setback zones have been established as solutions after the major coastal storm Xynthia and similar flood events, which flooded several low-urbanized areas on the Atlantic coast in 2010 and killed 41 people.

Many Mediterranean countries use coastal setback zones as tools that restrict future constructions, while rarely requiring existing assets to be relocated away from the flood zone. The same is valid for both Italy and Croatia. In Italy, coastal setback zone, as a method for coastal risk reduction, is proposed as an effective integrated strategy for future coastal planning in the Italian region of Emilia-Romagna (Perini et al., 2016). For Croatia, in the recent study by Lincke et al. (2020) the authors confirm that setback zones are an efficient measure for coastal adaptation. They modelled two variants of setback zones. The first variant restricts future constructions, while the second variant extends the construction restriction to already developed areas that are not protected by dikes and seawalls. The key finding is that economic impacts of sea-level rise can be significantly reduced by integrating setback zones into the adaptation strategy. If protection and construction restriction by setback zones are combined, the future cost of coastal flooding can be reduced by up to 39%. Combining protection and managed retreat by setback zones can reduce the future cost of coastal flooding by up to 93%.

That study took into account only the benefits that setback zones bring to reducing exposure to coastal flooding, while benefits to biodiversity protection, maintaining ecosystem services, coastal erosion or benefits for tourism and recreation were not taken into account. This limitation stresses the importance of setback zones even more since the cost of maintaining beaches due to coastal erosion is significant in many parts of the Mediterranean. It applies less to Croatia where only very few beaches are sandy and erodible, but it is certainly relevant for sandy beaches on the Italian Adriatic coast.

Long-term, in general, but considering that new setback line positions are to be re-established periodically because, over time, the sea level rise and coastal erosion will reduce the width of the setback.

WWF Report (2020) Working with Nature to Reduce Climate Risk. How investing in Nature-based Solutions can build resilience in Europe?