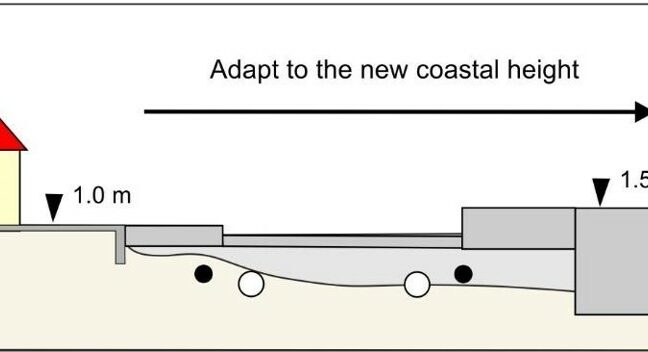 For centuries, coastal communities have used rocks and soil to extend and raise coastal land to gain additional space for living, but also as defence against sea storms and flooding. In more recent times, filling of wetland areas and near-shore areas below the high-tide level to build new urban or industrial sites has become a commonly used technique to gain new space. Such techniques highly impact coastal ecosystems, and are in direct conflict with moving towards greener adaptation.

By creating new seaward land coastal risks from sea storms and floods impacts in the hinterland get reduced: coastal land extension makes sense in already urbanized areas, where public space near the waterfront is missing (Figure 1), and like that is in general better accepted by the public. However, special care needs to be taken when carrying out coastal heightening and expansion projects due to their impacts on coastal and marine ecosystems. Moreover, land extension on the pristine, natural coasts makes them more vulnerable and degrades their environmental and landscape qualities, and therefore, such practice should not be considered in such areas. This is emphasized in the in the Article 8.3 of the Protocol on the ICZM in the Mediterranean where it says that open areas in which urban development and other activities are restricted or prohibited should be excluded from beach expansion.

Coastal advance can also include the extension of beaches. Beach extension should not be confused with beach nourishment: in Croatian language there is a distinction between the terms beach nourishment (cro. dohranjivanje) and beach extension (nasipavanje). Nourishment includes replacement of beach material taken away (due to the action of the sea and wind) from within the pre-determined beach borders, while extension extends the beach material beyond the dimensions of the existing beach. There are also projects where new beaches are created in front of rocky coasts. In such cases beach creation hardly has the function of defence / adaptation to erosion or sea-level rise: their function is merely to attract more tourists.

In the 1990s, the level of many embankments and streets in Venice (Italy) was raised to strengthen the protection against flooding due to high water events and to counter at least partially the effects of sea-level rise and ground subsidence (the latter due to industrial groundwater abstractions, a practice started in the first half of the 20th century and stopped at the end of the 1970s). This work was carried out along with a major programme of maintaining and renewing drinking water and sewerage conduits, together with other service infrastructure below the streets, as well as works to dredge the sediment accumulated in the city canals. Additional sand or other material was laid after the work under the streets, before replacing paving stones. Where possible, embankments and streets were raised up to the designated protection height of 110 cm above the reference sea level (i.e. up to 30 cm above the previous pavement level), significantly reducing the number of events where tides covered the streets. According to the Venice Municipality data (updated in 2011) 12% of the city is still located below the safeguard level of 110 cm, including the iconic and low-lying St. Mark’s Square.

In Croatia, during the industrial development after the WW2, coastal land expansion (combined with seawalls) was a relatively common approach to accommodate industrial infrastructure. In more recent times, tourism development re-ignited such practice to accommodate new tourism infrastructure. Although both practices represent transformation of natural coasts, when driven by tourism, people at least to some extent want to preserve the features of the landscape and the beautiful atmosphere of the space, beaches and biodiversity, all in order to be more competitive in the tourist market. Unfortunately, many such actions are carried out without a plan or permission, especially in the cases of individual buildings, which has significantly reduced the landscape value of the coast.

Today, the decision about the coastal advance/heightening should be taken on a different ground, starting from the growing negative impacts caused by the climate change, i.e. sea-level rise and storm surges. Given the relatively high economic costs of undertaking such actions and their maintenance it should be considered in a modest number of cases where a densely populated coast, or high cultural values, should be protected from the risk of flooding. In the Coastal Plan of the Kaštela City (2019), the envisaged future raising and extension of coastal land was accompanied by seawalls/breakwaters (see Figure 2).

More recently, a concept of floating houses is recognized as a part of flood-resilient architecture (e.g. in Amsterdam, Hamburg, Copenhagen), and can be considered as an alternative to land expansion in coastal areas sheltered from the waves.

New additions, raised and/or expanded from the existing coastline should be considered if there are justified technological and economic reasons, if no significant ecological loss is to be expected, and if it is financially and socially acceptable. Financial acceptability of such a project should depend on the financial strength of the present population and should not burden future generations. Also, decision-makers need to envisage sufficient financial resources for maintenance once the land gets raised/extended.

The costs and benefits depend greatly on the individual location and the adaptation needs. In Venice, for example, synergies with other works reduced the costs significantly.

As for limitations, one of the issues, seen in low-lying inland areas, is that bringing in landfill materials can lead to soil compaction and at least partial subsidence (this depends on the local soil conditions, including water content).

In addition, it can be difficult to ‘raise’ areas with modern urban and industrial areas and infrastructure. This can also be the case with fragile historical areas, such as the St. Mark’s Square in Venice which was not included in the street-raising works in Venice because raising the level of the Square, surrounded by heritage buildings, is expected to be rather expensive and difficult.