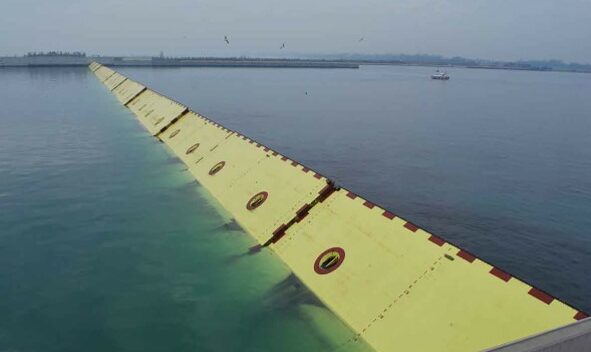 Storm surge gates/flood barriers are fixed installations that allow water to pass in normal conditions, and have gates or bulkheads that can be closed against storm surges or spring tides to prevent flooding. They are built to protect urban areas and infrastructure where storm surges and sea flooding could have major impacts. They can close the sea, mouth of a river or a waterway/channel. These barriers can be major infrastructure systems involving significant costs for construction and are often combined with other flood protection measures, such as dikes, seawalls and beach nourishment. Due to their expense and potential impacts, storm surge gates/flood barriers are relatively rare. Notable examples are those of Thames Barrier at the east side of the city of London, the Maeslantkering gate and Ijssel Barrier (The Netherlands), St. Petersburg (Russia), etc. In the Adriatic, the most famous example is the Venice Barriers (‘Mose’ system) which is the largest construction of this type, but also “Porte Vinciane” mobile barriers in the coastal area of Cesenatico. On Croatia’s coast such measures are inexistent at the moment mainly because the coast is protected with islands, and tides and oscillations are relatively small. However, a certain type of mobile barriers (along with other systems of de-salinizing freshwater) is under preparation in the Neretva Delta area to attenuate the salt water intrusion into the fertile soil of the area, but also salinization of freshwater that is normally used for irrigation.

On the other hand, success factors can be:

The benefits of the storm surge gates/flood barriers are that they provide protection for settlements and infrastructure against storm surges and, at the same time, enable continued passage for shipping, fisheries and aquatic species (when not in operation). On the other hand, the projects for the storm gates/flood barriers can be expensive and harmful to the surrounding ecosystems of the project area while in the construction phase.

The implementation time and lifetime of the storm surges gates/flood barriers depend on the future climate conditions and the area that the project will be made for. It is possible to design these structures in a way that bulkheads and levees are being elevated along with the sea level rise, but this should be considered in the earliest stages of the project.

On average, the implementation time for this adaptation option is more than 15 years, while for the expected lifetime it can differ significantly: from more than 25 years to 100 years.