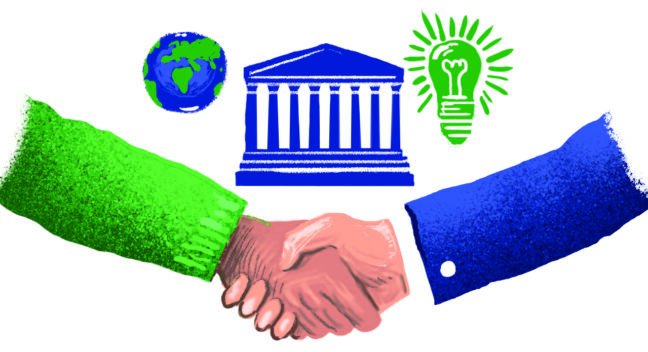 Governance is made of relations among institutions, processes and customs which define how the power is implemented, ways of taking decisions on subjects of public as well as private interest, and the ways how citizens and other actors give their votes. More concisely – governance decides who has power, who takes decisions, how other actors get their voice to be heard and how the effects of the implemented decisions are evaluated. (http://iog.ca/blog/defining‐governance) This includes building of confidence, relations, support by the local community, and implementation of agreed plans and programmes. Governance implies both tangible and intangible ways and processes needed to take and implement decisions. Thus, in its core, it is made of various boards and councils because through them it is easiest to link governance with management. (Governance handbook)

Strengthening governance for climate action is a task that exceeds the management structures of a country and requires wide social partnership to be successful. The extent and uncertainty of the challenge posed by climate change require a profound transformation of the society that can only be achieved by changing lifestyles, rule of knowledge, cooperation and planning and accepting sustainability and resilience as the most important, overarching common goal. Given the complexity of the challenge, the lead partner in the response has to be science. Accordingly, a special role is played by universities and other knowledge producing institutions. Cooperation of decision makers with scientists is one of key premises for the success of adaptation to and combating of climate change. Since an important transformation of the society is needed, it is necessary to include all social segments, as well as all actors, vectors of changes. In such a wide partnership it is essential to secure openness, clear communication and transparency in decision taking.

Strengthening governance for climate action may be realized by creation of bodies whose primary activity will be dealing with these tasks. One possibility to meet this necessity may be the establishment of a network of “Centres for climate action”. Those Centres should secure a platform for cooperation between science and decision makers, and act as an anchor that will help the climate action to have continuity even after political changes in the governing structures. Setting sustainable development as the main direction of adaptation plans and emissions reduction plans offers a priority axis for building partnerships.

In countries with highly fragmented local government, such as Croatia and Italy, response to the complex challenge of local adaptation to climate change is even more difficult. Small municipalities mostly lack capacities for such complex tasks; and often there are no universities, and often neither other knowledge institutions at reach. Therefore, solidarity and meditation of large towns and of the regional level (counties in Croatia, regions in Italy) is of utmost importance. Help and coordination of activities of numerous local administrations should be organised at that level, so that would also be the ideal level for the establishment of Centres for climate action. All the Centres would be networked within one country and coordination would be expected at the national level as well, while, using science channels, cooperation should be secured with the international scientific community.

The initial scheme of tasks of “Centres for climate action” is as follows:

Establishment of such “Centres for climate action” is a societal measure of innovating governance models. Alternative to such Centres are bodies such as councils, boards, working groups etc. that could also perform such function and where success would depend on the jurisdiction, capacities and dedication of the members.

In order to be able to assess benefits from the establishment of such a network of regional “Centres for climate action” in coastal and continental regions of a country, in this case Italy and Croatia, it is necessary to understand the risk brought about by the climate change. The EU funded PESETA III project reported a clear north-south divide as for the burden of climate change, where southern regions of Europe will suffer more. Coastal flooding was recognized among key impacts of the global warming. Coastal flood risk will increase in all coastal EU-countries, with Italy on the 3rd highest place. As for Croatia, coastal flood losses at the end of this century could amount to 1.8% of its GDP, 6th highest share of all EU countries (PESETA, 2020).

For adaptation, as well as for mitigation, great ambition and great knowledge are needed. Therefore, there is a need for competent human resources to whom these tasks will be a priority. In the current organisation of climate action, taking action is the task of everybody, but without precisely defined responsibilities. To achieve real progress in the climate action it is necessary to authorise and give obligation to bodies whose main task will be leading and coordinating the climate action. In a situation where the attribution of tasks and the availability of competence and knowledge are organized in a clear way, coordinated and efficient action would be easier to produce than in a situation of fragmented and unclear division of tasks.

Through petitions, the scientific community has shown awareness of the importance of a stronger and better involvement of scientists in the decision making relevant to the climate action. In some countries, institutional forms of support from scientists to the adaptation process exist, either organized by regional governments (see case study 08, Emilia Romagna region), or under the form of “Climate Action Regional Offices” CARO in Ireland. Such Centres for Climate Action would act as a platform for that purpose. Those could be defined using the existing management-scientific structures, where the personnel selected from both sides would be those who are most motivated and best qualifies for such tasks.

The creation of such a new governance board would need to involve the national level too, for instance including the establishment and coordination of such Centres in the national or regional adaptation plans. Being generally more distant from concrete hazards, risks and vulnerabilities the national level does not appear as the most appropriate for providing climate knowledge and driving climate action. The local level, on the other hand, being rather fragmented, is often economically and financially too weak and lacks adequate personnel and knowledge to be able to organise efficient operations and action in the field. Furthermore, many climate actions require coordination among different local units for the implementation of complex tasks. Finally, efficiency of the development and implementation would benefit from coordinated processes in which external bodies support single cities or municipalities. In such a subdivision of tasks, knowledgeable bodies, either created ad hoc or in the form of the existing leading administrations, can be a valuable solution for providing planning services and support for implementation and monitoring to small cities of a region. The costs of establishing those centres could be shared by the budgets of cities/counties/provinces/regions and the state budget. Through cooperation with universities and the business sector, the centres would operate at the project level, which means that public-private partnerships, as well as private businesses funds could be directed for climate action. Finally, a portion of funding could be secured through European projects as well as other international donors. Since those projects would be to the benefit of local communities, direct funding by citizens would also be expected (crowdfunding), as well as citizen initiatives in the field of science (citizen science).

“Centres for climate action” of this type are a modern, new, necessary and complex, but not necessarily expensive investment. It can reasonably be assumed that those could be established to be fully equipped and have efficient initial activity within 3 years or 1000 days.

Should the cities and regions opt for some other bodies, such as councils or committees, the establishment time is much shorter, but the competences are usually more limited.

The principal causes of climate change and the international political agreements, in spite of clear scientific warnings, have so far failed to produce results. The time left to reduce emissions, as well as for adaptation, is getting ever shorter. “Centres for climate action” should gradually reduce the total damage due to climate change induced events and make our regions more resilient to climate change. That will be good news for everyone, because climate change will get more and more intense.

This proposal is born from experience and needs in Croatia.

We kindly thank dr.sc. Vladimir Lay for the help and support in preparation of this text.