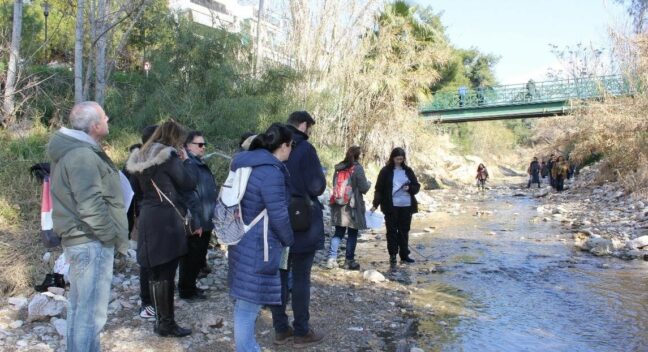 Keywords
wetlands, Attica Region, adaptation strategy, action plan, ecosystem services, awareness raising
Climate impacts
Droughts, Flooding
Sectors
Biodiversity, Sectors specific, Water management
Implementation time
The adaptation strategy and plan of the Attica wetlands were developed in the period 2012-2014. The Action Plan is integrated in the Regional Plan for Adaptation to Climate Change (RePACC) of Attica and more specifically in the biodiversity sector. The RePACC is to be revised every 7 years.

Attica is a region of Greece with extensive wetlands that includes estuaries, streams, lagoons, lakes and coastal marshes. Wetlands are important elements of the natural environment for the conservation of the ecosystems, recreational areas and areas of economic development. They are particularly important in reducing the impacts of floods, while their vegetation stabilizes and protects coastal areas, mitigating the impacts of waves and currents. They also improve water quality by trapping particles, sediments and toxic substances. Attica wetland areas are also highly used for agricultural purposes and various economic human activities that, in the last decades, have degraded their natural environment. Indeed, the region faces the combined challenges of a growing population and competing land-use demands. Current human pressures are exacerbated by climate change impacts, which could lead to the disappearance of many transitional wetland systems, while others are expected to shrink.

In the Attica region climate changes are expected to increase the frequency of drought periods, which would last longer and occur more frequently, with serious effects on wetlands which are rain-fed. According to the results of the OrientGate project, co-funded by the EU South East Europe Transnational Cooperation Programme, vulnerability to drought in the region is expected to increase by 2100 from low to moderate levels under the IPCC A1B emission scenario. A decrease in precipitation is also projected in autumn across the region under the A1B scenario by 2100, while slight increases are projected in spring.

Given these challenges, the Attica Regional Authority guided the process which defined the adaptation strategy and the action plan aiming to reduce the vulnerability of Attica’s wetlands and increase their adaptation capacity, prioritizing particularly vulnerable areas and improving stakeholder’s capacity to cope with climate change.

The overall objective of the adaptation strategy and the action plan developed for Attica’s wetlands is to improve the environmental quality of the ecosystems and the quality of life of citizens of the region. Specific objectives include:

To face the expected climate change impacts and to safeguard the wetland ecosystems, the Attica Regional Authority, the Greek Biotope Wetland Centre (EKBY) and the EU OrientGate project developed an adaptation strategy and an action plan that commit the region to the conservation and restoration of wetlands, aiming to increase their resilience, reduce biodiversity loss and make a better use of ecosystem services. The strategy and the action plan were developed during the lifetime of the OrientGate project, 2012-2014. The strategy identified seven axes under which specific and priority measures have been determined in the Action Plan:

Some progress towards the implementation of the action plan was achieved within the project “Improving knowledge and increasing awareness for wetland restoration in Attica Region” (2015 – 2017), funded by the EEA Financial Mechanism and national funds. The project aimed at further improving the knowledge and increasing awareness on climate change impacts for 50 Attica wetlands, in order to take the necessary precautionary measures for protecting, managing and restoring these wetlands. Main project results were:

Finally, as the Region of Attica is at the last stage of finalising its Regional Plan for Adaptation to Climate Change (RePACC) there has been a vulnerability assessment/risk analysis in several sectors including biodiversity/forestry ecosystems and water resources/floods using RCP4.5 and RCP8.5 scenarios for two future periods (2031-2050 and 2081-2100). Therefore, the measure “Assessment and periodic updating of climate indicators for drought – water scarcity and floods, with climate forecasting models, for the territory of the Region of Attica, and exploring the impact on biodiversity” of the Action Plan for Attica’s wetlands has also been partially implemented.

The adaptation strategy and action plan for Attica’s wetlands were developed within the OrientGate project by the Environmental Department of Attica Regional Authority with the scientific support of the Greek Biotope Wetland Centre (EKBY) of the Goulandris Natural History Museum. The Attica Regional Authority drove the entire process and drafted a road map to promote the implementation of the actions of the plan, while the EKBY provided the scientific support. In addition to two main institutions, the collaboration expanded to central, regional and local services and authorities, research agencies, environmental organizations and citizens. Although they participated to a minor extent, they provided their knowledge, experience and practices within the adaptation process.

Since the beginning, the participative process for the definition of the strategy and action plan had been consistent. Indeed, the Attica Region Authority engaged a wide range of stakeholders, including central, regional and local authorities, research agencies, environmental organizations and citizens. Stakeholders were encouraged to take action and to participate through interviews, meetings, workshops and seminars, through which perspectives, experiences, good and bad practices were exchanged.

Training sessions were also organised. Participants from public services, NGOs, research institutes and foreign participants from Serbia and Romania were involved in the training seminar “Adaptation strategy for Attica wetlands: the assessment of wetland vulnerability index”. After that, a dissemination event took place and registered around 80 participants from different groups of stakeholders, who received information on wetland vulnerability to drought and on the adaptation action plan. The Regional Plan for the Adaptation to Climate Change (RePACC) of Attica assesses the vulnerability/risk analysis in several sectors (agriculture, fisheries, forestry, water resources, etc) and elaborates an action plan for adaptation to climate change. For that purpose, a video conference took place on the 22nd of July 2020, specifically focused on the biodiversity sector, including Attica’s wetlands, with the major public administration stakeholders and the scientists who worked in that area. Attica’s RePACC was under public consultation for the period 1-15 December 2020.

The following factors were relevant for the design of the adaptation strategy and plan:

During the elaboration of the adaptation strategy and the adaptation plan, particular hindering factors did not emerge. Some difficulties arose in the exchange of data among the scientific community, the central and regional authorities and policy makers, in particular in relation to the integration of climate change knowledge into adaptation planning and policy. Greater limitations are expected in the implementation phase, for example related to the availability of funds, the relatively limited operational capacity to activate the proposed adaptation measures and the regulation of land uses in view of wetland protection and restoration. In measures that institutional or regulatory legislation is to be preceded, further delays in their implementation may take place.

The development of the adaptation strategy and the action plan for Attica’s wetlands was co-funded by the OrientGate project and national funds for a total of 150.000 Euros. This sum included travel and dissemination expenses. The following project “Improving knowledge and increasing awareness for wetland restoration in the Attica Region” was co-funded with 85% coming from the EEA Financial Mechanism and 15% from national funds (Greek Public Investment Programme), for a total budget of about 398.887 Euros.

The implementation of the strategy and plan is expected to have beneficial effects on Attica’s wetland conservation and restoration and consequently on their resilience to climate-related impacts. Indeed, wetland restoration is expected to mitigate the impacts of floods, to stabilize coastal areas through improved vegetation and consequent reduction of coastal erosion, to improve water quality, to support economic activities and to ameliorate citizens’ life. Further benefits include the improvement of the knowledge and management capacity of climate change impacts and of wetland ecosystems for the agencies involved in their conservation, as well as the enhancement of environmental awareness and the development of information centres.

Title: Interactive story map of the project for improving knowledge and increasing awareness for wetland restoration in Attica Region (snapshot)