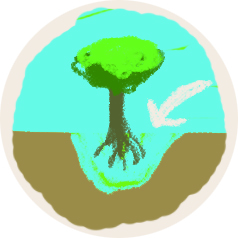 Mediterranean forests are one of the world’s biodiversity “hotspots” that carry multiple values of general benefit (FAO, 2011). Nowadays, they are affected by climate change and Mediterranean forest ecosystems are projected to be particularly exposed to the impacts of climate change by 2050 (FAO, 2011). The adverse effects of climate change are reflected in the climate zone shifts, but also a rise in the number of extreme weather events, and the rise in temperature and increasing drought frequency (EEA, 2016). In addition, Mediterranean forests were once overexploited, and a significant part (75%) of this ecosystem was destroyed by civilizational pressures as early as in the 19th century (Quezel & Medail, 2003).

Even if the Mediterranean forests today are mainly composed of Mediterranean drought-resistant species (Timbal & Aussenac 1996), they are still threatened by the increasing intensity, duration and frequency of droughts over the past few decades (IPCC, 2014). The process of aridification could cause the forest to dry out (Porter et al., 1991), wherein biotic factors play a terminal role (Guillermo Gea-Izquierdo et al., 2019). Adverse effects of this process include biodiversity loss and resistance to pests, the spread of invasive species, forest fires and CO2 emissions.

In the new EU Forest Strategy 2021, special attention has been given to afforestation. For afforestation to mitigate the aforementioned negative consequences, a strategic approach in the selection of suitable species, planting design and maintenance of the existing and new trees needs to be taken.  In international policies, forest landscape restoration (FLR) is a tremendous legislative and implementation effort, achieved through, for example, the “Bonn Challenge”, the “New York Declaration on Forests” and “Land net degradation neutrality”, established by the ‘United Nations Convention to Combat Desertification’ and the ‘Convention on Biological Diversity’ (Stanturf et al., 2017). It is a planned process that aims to regain ecological integrity and enhance human well-being in deforested or degraded forest landscapes. Despite the promotion and attempts to implement FLR globally, it is often difficult to achieve this type of objectives locally. This gives another indication of how valuable the national surveys that take local conditions and species into account really are. Although the value of FLR interventions in preventing further loss and degradation of forests is recognized globally, their successful implementation is only possible if it is built on scientific knowledge. Adapting silvicultural activities to specific habitat conditions and projected climate change still poses a scientific challenge for the Mediterranean region. For example, after the degradation of Mediterranean forests, Aleppo pine (Pinus halepensis) has been planted en masse as a fast-growing pioneer species, and it is thought to be particularly well-suited for its drought tolerance (Timbal & Aussenac, 1996). Nowadays, the Aleppo pine plays an important role in soil preparation for other indigenous species (e.g. Quercus ilex). Furthermore, coastal pine (P. maritima), which has been dominant in some parts of the Mediterranean, has been losing its natural habitat due to drought and it is replaced by more resistant species such as the stone pine (P. pinea). Therefore, climate prediction is important for afforestation of a specific area, along with knowledge of the ecological needs of tree species.

The global environmental platform www.restor.eco, launched in 2021, plays a promising role and aims to involve all interested parties in the global movement for afforestation and conversion of unused land to forests. The platform offers support relating to the latest scientific knowledge, easy access to environmental information, specific point and ecosystem information worldwide, and the exchange of experience. This is very important, because in case of poor species selection, inadequate planting or obsolescent silvicultural methods, afforestation will not be successful and will have negative environmental and financial impacts.

The increase in forest cover has been recognized as a measure to mitigate the negative effects of climate change and to preserve or increase biodiversity, and since it can play a key role in the carbon sink, it has been included in the legislation (EU LULUCF 2018/841). Forests along the Mediterranean shelf are particularly important for watercourse regulation, water retention, erosion prevention, and can help the local community adapt to climate change. Afforestation has many benefits, especially if the goal is to create mixed forest stands (Bravo-Oviedo et al., 2014). Mixed stands are less susceptible to harmful effects such as pest invasion, which can cause damage that will often take years to repair (Pernek et al., 2019). Funding can be supported by the European funds related to the European Green Deal, e.g. The EU Biodiversity Strategy for 2030, rural development, etc.

Forest management in the Mediterranean is very rarely oriented to felling and selling assortments. What often stands out more is their anti-erosion, hydrological and water protection function. In general, coastal forests offer a significant public benefit, and ecological and social function. Their public benefit function is particularly reflected in tourism; trees give us shade, smells, colour, sounds, prevent wind damage, and generally give a stronger sense of touch and connection with nature. All this is reflected in the growing trend of tourists staying in this type of accommodation. Trees, whether they are separate or in a forest area, have a distinct ambient value and provide many established camping areas, and they offer more opportunities for tourism earnings.

Afforestation in the Mediterranean area is generally difficult to achieve due to poorly developed soil and frequent droughts, and costs are higher than the average in other areas. The choice of species is very important when climate predictions must be taken into account. Research has shown that, if species that have been dominant in an area for centuries cannot adapt to new conditions, they are more likely to lose their dominance and become replaced by more resistant species (Guillermo Gea-Izquierdo et al., 2019). Although soil preparation and fertilization, along with the choice of type and quality of seedlings increase the costs of afforestation, it is a sound investment in the long run. Indigenous vegetation should be given priority, keeping in mind that this is not always possible due to specific conditions, and sometimes transitional forest ecosystems are the only solution, which slows down an already lengthy process (turning it into an intergenerational process). The cost of seedlings ranges between €3 and 8, given that they are expected to be more resilient in the Mediterranean, and it would be optimal to count more on sturdy and older seedlings, the cost of which ranges between €4 and 6. The costs of afforestation, besides seedling and planting costs, also include the costs of soil preparation, installation of fences, etc. The cost of care to be carried out several years after planting is €300/ha in the first few years, and about €100/ha in the later years (European Forest Institute, 2000).

The administrative procedure for finding suitable land for afforestation or converting land to forestland is often demanding and time-consuming. A professionally conducted implementation and joining the “Restor” platform gives opportunities for prompt planning of afforestation and forest care efforts. Volunteer organizations and schools can join, establish non-governmental organizations, and organize tree planting volunteer actions. Examples of good practice include initiatives such as “Plant a tree, don’t be a stump” or donating free seedlings for tree planting missions similar to those in Emilia Romagna.

Taking part in global actions in which CO2 is sequestrated through afforestation to mitigate the effects of climate change is highly motivating and educational, and such actions can be taken relatively quickly. Very intensive tree care measures must be taken for at least 5 years following afforestation. All measures should be monitored by multi-annual projects funded through the EU funds, and project documentation could be prepared in a short time.